Isn’t this scary looking? What a freaky chihuahua! I got it off a Facebook ad and I even put it onto my profile photo.This is an image I’ll never be able to get out of my head; this thing will be imprinted onto my brain forever.I used to have(and breed) chihuahuas years ago but none of them ever looked like this; it’s the funniest thing and cracks me up! I saw this poodle once too and it was hideous; a monstrosity; clipped and pouffed up to be the gayest ridiculous looking thing I’ve ever seen and I’d rather burn my eyes out than to look at it! The poor thing, it must be so embarrassed and hard to show itself out in public looking like that; it has no dignity left! 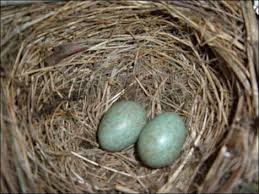 I took down an old dead brown hanging Evergreen plant off the veranda I had up over Christmas and a bird came flying out scaring the bejesus out of me!(lucky I never fell off the chair I was so startled!) As I took down the plant I happened to peer into it and was surprised to see a little nest in there, complete with 2 tiny blue eggs! I carefully and gently placed the plant in its’ holder(instead of tossing it out in the garbage as I would normally do) and put it down next to a bush, hidden away from prying eyes, so the mother bird could return to her home and raise her babies.My hubby says she will abandon it and my mom said I should have left it hanging where it was(so the cats can’t get to it, even though it’s well hidden in there) but I’m NOT going to leave hanging ‘air dirt” up there for 2-3 months until the birds hatch and leave home; it’ll look like a decrepit SLUM with a dead brown plant hanging there on the porch! I think NOT!  I took photos of it and showed the kids and will keep a daily eye on it and see how it goes and hope for the best…I also saw something that you don’t see every day: a bird chasing a squirrel along the fence and up a tree! I guess it got too close to its nest?