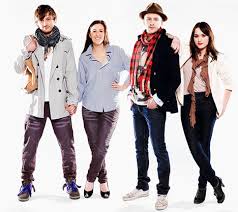 I was talking with my son today and one of our chats went pretty much like this:

Him: “There was a big riot and the police used tear gas.”

(my obvious question here is if they WON and they’re happy, then why riot,usually an act of displeasure,such as with the gov’t, a policy, or an act of political statement, and I’d hate to think what they’d do if they LOST….) so that’s word # 1.(never heard of them)

He mentioned about a H+M that was on fire downtown….

Him: “Clothing store, for Hipsters.”

Me;”What’s a Hipster?”(note my common response to most things lately,”What’s that?”) and he described how they dress and the music they like and so on, to which I added,

“I guess I’m not a Hipster.”(since I was clueless what they were ,and not to be confused with hippies) see above photo: the clothing reminds me of the styles we wore back in the 1980’s(I wonder if the Hipsters know this?)

He also used a word I DO know: “Guido”…so I’m not TOTALLY hopeless…. 🙂