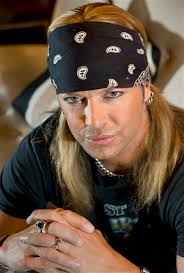 Poor Bret Michaels. This poor guy just can’t seem to get a break, has incredible bad luck, and it seems like something’s out to “get” him! All in a short period of time this poor man has: fallen onstage and broke his nose and got stitches, had something fall on his head(I believe it was a prop or a piece of stage scenery or something like that),3 weeks or so ago had an emergency appendectomy( came perilously close to appendix rupturing which would have killed him) and last week a sudden brain hemmorage(50% of people that have it die right then and there, and others within a few days following, or a repeat can also occur). Someone is out to “get” him! Poor guy! Many thoughts and prayers(incl. my own) are with him; he has had a run of bad luck and misfortune and health crisis,and on top of it he also has type 1 diabetes! Despite it all,however, he has survived and is a fighter, so God still has a purpose for him; he’s still alive despite the odds against him; he has come thru them all.His Guardian Angel must be working overtime,but he’s a survivor and I wish him a speedy recovery!! I feel so badly for the poor guy; talk about bad luck! He must wonder what’s coming next!