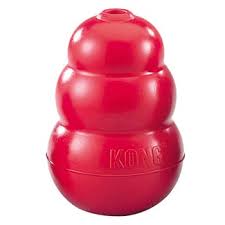 When I was out I picked up a “Kong” rubber dog toy for Wilson. It looks like a red rubber snowman in a way with an opening at the bottom to insert food or dog treats. Apparantly it’s quite popular and dogs are supposed to love it…except Wilson couldn’t care less, so it either didn’t “work” or our dog is simply a retard! I even put pieces of meat in it to attract him and within seconds he extracted it and ignored it.Then I rubbed some bacon fat on the inside and he sniffed it and gave it a few licks then walked away. I threw it for a game of “Fetch”(which he LOVES with a ball, his squeaky chew toy, and his fave. “Piggy Wiggy” toy, even bringing me the items to throw) but he didn’t care and never even went after it.I even spent a whole 10$ on it and for what? The dog is an ingrate and now I have to figure out whether the toy isn’t what it promised(and I got suckered in to yet another advertising scam) or I  just have a dumb dog, or is it yet something else that just doesn’t work for us? Maybe he’ll “take” to it in time?