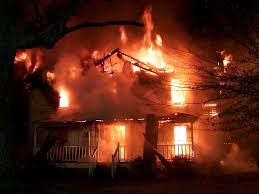 Our neighbours a few houses over had a fire the other night. First of all the kids were outside playing and heard the sirens and then they stopped and they saw the flashing lights of 2 firetrucks at the neighbour’s…and they were still there 3 HRS later so we knew it wasn’t a false alarm so we walked over to see(yes, we’re the nosey neighbours now) and there was nothing visible(no flames or charred remains) but we could smell the smoke and I saw a fireman in their window. It must have been a minor one though as the people are still there; my guess would be a small kitchen fire.The next day the fire marshal was over as well; I saw them talking outside. When we had ours 14 YRS ago it was a major one(electrical) and half the house was destroyed and we had to spend 10 weeks in a motel( we had 6 kids at the time, incl. 3 weeks old newborn baby) while it was rebuilt; they had to redo all the walls, ceilings and floors, and re-paint and rip up the carpets and hardwood and had to replace pretty well all contents in the house; ruined from either burned, smoke or water damage, or all three.We barely made it out alive(and our dog DID die) and it was very traumatic and I even had Post-Traumatic Stress Disorder for a whole year after from the terrifying experience.

As well, my hubby told me following his surgery he’ll be staying with his family(dad and siblings) to recover instead of here with us which I not only find odd(this IS his home,afterall) but hurtful and insulting as well; he’s always put them first, before us, and it should be the other way around. The kids and I are his family now,but if both they and us need him, we always lose out.