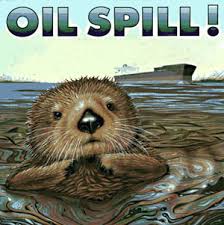 In true enviro-freak form, the recent oil spill in the Gulf of Mexico has been way over reported and blown way out of proportion and into more fear mongering..It has been the main story now for that past few days about how it’s such an environmental disaster and the “poor animals” etc… blah,blah,blah. Yet barely ANY mention or coverage about the 11 oil workers(which also means 11 hurting grieving families) that also died in the accident; the HUMAN aspect and loss no one seems to care about and barely made the news; they’re just concentrating on the environmental impact; how it affects, harms and kills wildlife, and fish, nevermind the people. Everything always has to be about the environment nowadays; earth worship and going “Green” is the new fad but I am having none of it; I refuse to be indoctrinated and brainwashed into the “Mother Earth” hug a tree nature loving earth worshipping mumbo-jumbo. People and human life matters MORE than the animals or the earth. Enviro-nazis are always  putting animals and planet before people and giving too much coverage and importance to this story. Ok, so there was a massive oil spill. It’s in the water. Animals will die, big frickin DEAL!It was an accident and they are trying to fix it. Life goes on. You can always purify the water before human usage and as for the animals, so what; they’ll replenish in time.It also brings to mind the Bible prophecy of being in the Last Days,”…and the sea will be no more”. Perhaps this is what they meant? We are THIS close to Jesus’ return,so instead of obsessing over the earth and becoming a slave to radical  environmentalism we should glory in GOD and worship HIM and NOT the earth! Take care of the creation He gave us, but don’t obsess over it and give allegience to it that it owed solely to God alone. The earth is NOT God!! Instead of the media going overboard in this oil spill story how about more coverage to more important stories such as the devastation and loss with the floodings and tornadoes in the Southern US?