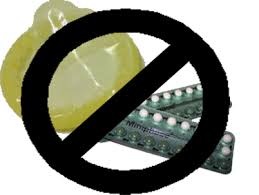 The birth control pill is being “celebrated” of 50 years of existence. 50 years of SIN, that is! The world claims it’s “liberated” women and the “sexual revolution”, which is really nothing more than promoting and encouraging lust, selfishness and whoring around and the limiting(and destruction) of families and family values. It has allowed women to be whores, to be selfish and prevent children and to sleep around indiscriminately. The entire contraceptive movement is nothing more than encouraging and promoting ungodly selfish anti-life and anti-family lifestyles. Planned Parenthood and the entire abortion and contraception movement and mentality was spearheaded by a Margaret Sanger, who was a white supremacist and eugenicist. She supported Hitler’s “Master Race” agenda and stated that the REAL reason BEHIND  abortion and birth control were to eliminate “inferior races”, mainly blacks and poor people, whom she cruelly referred to as “weeds” in society. There is NOTHING to “celebrate” here. Sin should NOT be celebrated,promoted,glorified, or condoned. Not to mention the additional fact that this horrible little pill is dangerous to womens’ health as well and can cause heart attacks, strokes, blood clots and even cancer. Is all this REALLY “worth” it just so you DON’T get pregnant? Why does society think having a baby is something so awful and to be avoided at all costs, even risking one’s health(not to mention their eternal soul!) to DO so? God has commanded us to ‘be fruitful and multiply”and anything that purposely prevents , gets in the way of, or destroys that is a mortal sin, both against God and humanity. A baby is the greatest blessing from god! It is a GIFT, not a punishment or curse! The fruit of the womb is a REWARD!How can the world have become so selfish, so lustful, so child-hating and promiscuous? True to what the Bible stated in these “Last Days” that the world will call what is bad good,and what is good, bad. This is proof of that! People have turned their backs on God.Selfishness and lust has become society’s new “god”. Shameful!