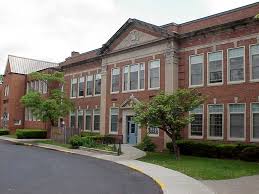 I got a notice from my grade school(from grades K-6) alumni Facebook group  that Mr.T is retiring. I can’t believe it! I also can’t believe he’s still been at that same school for over 35 YRS! I remember him back in the 70’s when he taught grades 4 and 5; he was a “cool” 70’s “Disco” hipster; he looked like the bearded Bee Gees brother! Now, he’s retiring, likely a grandfather. He’d be in his 60’s; he was probably in his 30’s then when I knew him. It brings back happy childhood memories; I liked that school; I was happy then(things didn’t start to go bad until grade 7 which was another school) and I had friends and fun and many fond memories of that school and that time in my life. One of my kids said hearing of his retirement must make me feel old but actually it was the opposite: it made me feel YOUNG; I had “flash-backs” of my time then, and felt like I was 9-10 years old again. I just can’t picture Mr.T as an old man, retiring. He’d be a bit younger than my own mother.I still see him as the bearded young  fashionable and hip guy from the 70’s. He’s now likely fat and bald( ha ha ha).I have my happy memories of what it(and life) was like then and I’m sticking with it.It brought me back to some happy times. 🙂  Thanx for the memories Mr. T and all the other teachers I once knew and who were a big part of my childhood and it’s memories.Public school has changed for the worse since then and we now homeschool our own kids(for various reasons) but Mr.T was one of the good guys! Too bad there are so few like him.He will be missed by generations of kids.