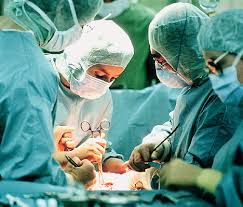 After about 10 months of waiting hubby finally had his knee surgery to repair something-or-other that he tore playing squash. Everything went well, with the only concern that he took longer than usual to wake up and once he did he was babbling, incoherent and speaking in “tongues” and he was only able to move his hands and feet but his arms and legs were “paralyzed” for awhile but ok later. He has a few stitches and an elastic bandage and goes for a follow-up in 2 weeks and needs physio for 6 weeks. This is a major accomplishment for him as he is one of the biggest wimps, pussies, sucks and babies in the world; he acts like he’s DYING when he just has a cold and faints at the sight of needles! It was also his first ever surgery of any kind or anesthetic. I was so worried I didn’t sleep well last night and it’s such a relief to finally be over. It hurts(but nowhere like having a BABY so suck it up, Buttercup,and now we know why God created it so women have the babies and not men; they could never handle THAT pain, and I have had 11 births and 3 surgeries and labour hurts MORE!), but he has Tylenol # 3 and it’s a short-term pain for a long-term benefit, whereas if he hasn’t had the operation his knee would never get better on it’s own and would hurt forever.Now the hardest is to endure his endless whining!Ha ha!