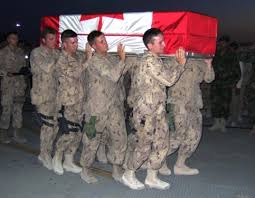 There is always a lot of news coverage when our soldiers are killed in Afghanistan, and it’s all over the news and they make a big thing of the repatriation ceremony and with people lavishing praise on the troops, etc… everyone is crying and saying how they’re “heroes” and they support the troops, etc. but who cries for the innocent CIVILIANS that the troops kill?(what they are doing over there is NOT “peace keeping”; they are helping no one) Who cares about THEM? The way I see it is the soldiers are aware of,and take, the risk of being killed when they go to battle but the civilians do NOT sign up for it; they are caught in the middle, simply have the unfortunate circumstance of living in a war zone, trying to live their lives, raise their families, go to work and school and go about their daily lives being caught up in a war. They are also oppressed by foreign troops, often tortured, raped and killed mercilessly for no reason. The last time I checked Afghanistan is no threat to us; they have never invaded us, threatened to invade us, or inflicted a terrorist attack on our country, yet our troops are there. Why? They have no business being there, the majority of people in this country polled(it was like some 75%) don’t want them there,and the Afghani people don’t want them there! It is up to Afghanistan to govern their country as THEY see fit, not how Canada or any other nation dictates,(we may not “approve” of the Taliban, but it’s not our business) and we have no business being there! Too many soldiers have been needlessly killed over there(over a hundred) and even MORE innocent civilians. It’s time the troops withdraw and come home. I do NOT support war or oppression of any country or people, or the plundering/stealing of their resources(such as the Americans after the oil in Iraq) The REAL victims in this war are the people that live there; the innocent civilians, but who cries for and mourns for them? They are always mentioning the soldiers, but what about the civilians?They are the REAL victims!! They are the ones I most grieve for. No good ever comes out of war, this is not a “just” war, and I only support peace, just as Jesus was peaceful and nonviolent; He would not condone war,either!