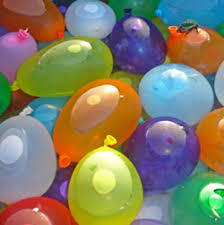 At the church family picnic the park had all these  ridiculous bans and rules, bowing into enviro-freak demands, such as not allowing egg toss(saying it’s “bad for the grass”) or water-balloon toss(claiming it “kills the birds that eat the balloon remnants”) it was just so lame and stupid; they have to go overboard with it and care more about the environment and animals than about PEOPLE and ruining what would have been(and should have been) a fun time for families! Instead, they substituted with a golfball on a spoon toss(yeah, right, so get hit in the head and get a skull fracture instead of egg slimed or water; like that’s a better option!) so what we have decided to do, thumbing our noses in an act of defiance and protest to the enviro-nazis, is when we have our own After School party in our backyard  is to have  all those games that they banned, as well, string up a pinata with a photo of the annoying enviro-freak David Suzuki on it(it will give me such gleeful pleasure to whack the crap out of him!), and to celebrate with a pollution-filled BBQ, styrofoam cups and maybe also spritz a bit of aerosol into the air just for the hell of it. We are sick and tired of those fanatical enviro zealots constantly  shoving that save the earth, tree hugging, Green, enviro-friendly, Mother Nature mumbo-jumbo crap in our faces and down our throats, and banning everyting from lawn pesticides, plastic bags, water bottles,etc. We will NOT give in to their propaganda and pressure, but will have fun and live our lives as WE choose and NOT as they dictate! If they want to do it, fine, but they shouldn’t ban everything and take the fun out of life.