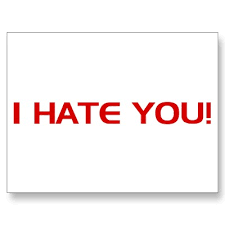 I noticed a recent comment I’d posted in a blog was removed. It wasn’t anything mean, insulting, critical, or controversial.In fact,it was a note of congratulations! I suspect it was a case of not WHAT the comment was but rather WHO said it; everyone has always hated me. This is a hard cold fact and it really hurts. I have never been one to follow the crowd and have always stayed true to myself and my values and to defend God’s truth.I have strong opinions, high standards and morals and stand up for what I believe in. This has ostracized me from most of society, caused me to be bullied in school, I have lost friends over it, been deleted or even banned from blogs, de-friended and blocked on Facebook,attacked and even threatened online, called the most vile hateful and hurtful things and just hated overall.I do NOT go along with the world and I don’t excuse or condone sin. I call things as I see them. I am blunt and forthright.I support those who are oppressed and bullied. I oppose and protest intrusive Big Government.I abhor Political Correctness, feminism, and radical environmentalism and animal-rights freaks.I detest sexual immorality.I shun birth control, worldiness and sinful lifestyles. I have never been “popular”, fit in, or liked. I have always gone my own way and do what I believe is right. It is hurtful(and lonely) always being hated but Jesus warned His followers that in the world they will be hated and reviled, falsely accused and persecuted just as He was.(so it means I must be doing something right and am in good company!)He says the world loves it’s own but hates those who are not of the world.We are also called to have a great horror of sin and contempt for the world. This means going against the mainstream, standing out for God and His truths and laws. It means being different and suffering for it. It means being hated and ostracized, deleted, blocked, banned, de-friended and the like, but when it comes to judgement day I can stand in front of God with a clear conscience, clean living and upright morals, even if others see it as “narrow-minded”, “judgemental”,”intolerant” “stuck-up”, “Goody-Two-Shoes”,etc. and I will be hated for it, but ultimately it’s God’s view of me that matters, and eternity lasts longer than my “purgatory” here on earth!(and they say Christians are “intolerant”; they should look in the mirror!) I can live with myself and sleep at night.Can the haters say the same? What is the state of THEIR souls? Are they perhaps bothered by their sin, being called on it and don’t want to face it? Shoot the messenger sort of thing?Sometimes it feels like it’s me against the world but I DO have God on my side!!