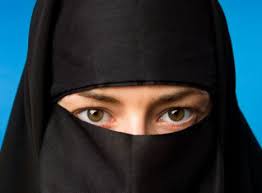 I read an article that a town in Italy has banned an Islamic version of a body-covering  swimsuit, modest compared to the sleazy bikinis most people are seen flaunting at the beach.(They let people go half NAKED and topless on the beach but NOT covered up? WHAAAT?) In France and other countries they have also banned the Moslem women’s niqab, or head scarf and the burka, the full-body covering gown and facial veil covering everything except for the eyes. I see no sense in this, except they want to “banish” Islam and not see any reminders of it; it’s Islamophobia plain and simple. There’s no way a devout Moslem woman would be seen out in public wearing her bare face or exposing her hair, arms or legs, so such draconian oppressive bans will drive them underground; forcing them to stay hidden away at home, further isolating them from society. This is just wrong. What next? Banning the Sikh’s turbans, the Jewish yamulke,the Hare Krishna or Buddhist monks robes,the Amish kapp and apron,  the Christian’s Crucifix necklace, the Rastafarian dreadlocks,etc.too? Where does it END? Really though, what harm does the Islamic way of dress cause? I personally admire them for their modesty and it’s certainly a lot better than the skanky revealing, low-cut belly-baring tops, short cut shorts and mini skirts, see thru and tight attire  and other various sleazy clothing most women wear today, that’s for sure! At least they respect their bodies and cover up and don’t show everything off to the world! This is simply another form of religious persecution.On one hand, they DO allow the gays to flaunt their sinful lifestyle in “pride” parades, and have nudist beaches and other immoral and blatantly sinful things shoved in our faces  in public, yet decide to banish and outlaw people for the MODEST way they dress? I have no problem with other cultures or other religions or seeing their clothing that represent it just because it’s foreign or different.There are many cultures and manners of dress in the world and once they start banning one group it’s just a matter of time before they come for YOUR group next! Freedom means being allowed to worship AND to dress how you please and there’s nothing wrong with having a variety of cultures visible and represented in any society.