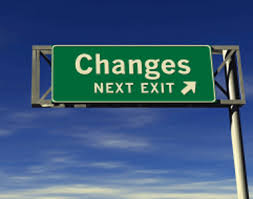 Like the David Bowie song goes, “Ch-ch-ch-changes….” I am a rigid, structured, ordered, obsessive person who absolutely HATES changes; I prefer things just stay the way they are; the way I’m used to; the way I know how and feel comfortable, safe,and secure with.. I have a hard enough problem learning to do things in the first place(the computer comes to mind here) so when things go and change and I have learn something new all over again I get highly agitated and frustrated. Imagine my dismay then when I find out years later that most of my former school friends(grade school, Jr. high, highschool) had COMPLETELY changed, and not for the better. Sadly, now the only thing we have in common anymore is our past; they are no longer the same people I once knew and liked but are completely different people.I liked who they WERE but not who they ARE. My friends then were shy,funny,had the same interests as me(that’s generally why you’re friends, right?) and had the same values. As they grew up and we grew apart, as they became teens and later adults they got “corrupted” by the world and bad influences,doing the very same things we universally detested; turning bad and immoral;they slept around, drank alcohol, smoked, took drugs, went to parties and bars,and some got into low-class interests. Meanwhile I haven’t changed; I mean, I matured, but always maintained my same morals, standards and interests.I still like and dislike the same things now that I did then. I still live the same clean lifestyle and have the same values. It’s hard to see that; that you “outgrow” people; that your lives take different directions, that you no longer have the same values and ideals.People can “lose” who they were and what they once believed in. They can lose their way and turn their backs on good upbringings.They can give up a clean and godly life for a life of sin.People change over the years. They are no longer the same people I once knew.Some of them are still decent and nice and good moral people but most of them are not.They have become as adults the very same people I avoided in Jr. high and  high school; the party-ers and such.As adults we have nothing in common and have different social circles.It’s sad as I feel I have lost them twice: the first time as they or I moved away or we went to different schools, to lose touch over the years,and then again as adults when we re-established contact, only to learn they aren’t the same people anymore.I mourn the “loss” of the friends I once had, the people they once were, the fun we once had, the common bonds we once shared,the laughs we had, the happy memories we once had.Looking back, I suppose if they did turn this way as teens it’s best we DID go to different schools as we wouldn’t have hung around together anyway and would have had different groups of friends.I was always with the studious, the upright,the nerds, the moral, the Christian; the ones who shunned parties, dances, boys, dating, sports,school activities, drinking, etc.I am STILL that same person today but most of my former friends are not. As I said, I wish things didn’t have to change and that they(and people) would just stay the same.SOME change IS good; progressive change, but if something’s working well and you’re happy with it, LEAVE it!