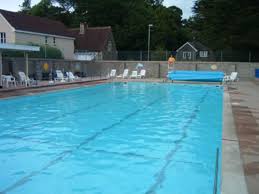 Our pool pump has died. It was making this really loud weird noise so I went down in the basement to check and it was leaking water all over the floor, it felt hot and the clear glass part was all sweaty and steamed up from the heat, and the pool jets weren’t circulating water so I turned it off in case it explodes under pressure or something or leaks even more! I hope it’s something as simple as a dead chipmunk stuck and not that the motor’s burned out and the entire pump has to be replaced but I just KNOW with OUR luck it will be the worst case scenario as it usually is! We put a call in to the repairman and he SAID he would come by but of course he never did; typical. He said they only sell the newer types of pumps as well the kind that are wired in and of course we have no idea which ours is(but with our luck I’ll guess the outdated kind because that’s sort of how things work for us) and he said if ours is the old model we’d first need an electrician in to rewire(costing MORE $$$$ and taking even more time to get the pool up and running again, and each passing day increasing the chance of algae) before they could even put a new pump in. The pump itself costs about 700$. This is such a money pit; it’s costing so much to maintain, not to mention the chemicals and such but also to replace things that always keep going wrong and this pump is only about 2 years old,too; it shouldn’t even have died yet! It’s so much work, time and expense, and when things like this happen(or like when we had the really bad algae problem a couple of years ago and of course it was during a heatwave,too!) we can’t even USE the pool, so it’s for nothing.So now we have to wait until the guy shows up and see what kind of pump it is and what the problem is and pray the algae doesn’t come in the meantime without circulating water, not to mention all the heavy rain we’ve had lately, too…oh, yeah, and mosquitoes like to lay their eggs in stagnant water as well.