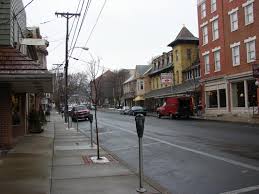 I hate this “Bumble-F*ck” small town we live in. It looks much like the photo seen here as do most small towns with their main street and clock tower. The kind of place where they roll up the sidewalks(that is, the side of the street that actually HAS a sidewalk!) at 17:00 every night. A small town with small population and nothing to do and nowhere to go and where the biggest store is Walmart.The local highschool is well known for it’s gang and drug problem and where being drunk, slutty and having a high teen pregnancy rate is the norm. There are no malls, only one cinema,and where nothing ever starts on time, is often cancelled, and where no one(eg. repairman, deliveries,etc.) is reliable or responsible or ever come on time or even on the day they say they’ll come ,and where there are limited to no job opportunities. Where it takes 6 WEEKS just to get an eye exam app’t. there are not enough family doctors to go around, leaving our only options a walk-in clinic , 6-8 HRS  wait at the ER at the hospital(where if anything major they still  send you to a bigger hospital in either a bigger town or nearby city(even MORE waiting!); depending on how bad a shape you’re in and if you get airlifted to the city you KNOW you’re a goner!), and where the downtown(and I use that word loosely) looks like a ghost town; half the stores and businesses are empty or even boarded up; they only stay here a year at the most; a run-town, going nowhere, impoverished town and with a high crime rate(mainly robberies, break-ins, muggings, rapes ,and drugs, with a few murders thrown in there esp. considering the small population. A place where “service” sucks and you can never get any of the good products; you have to drive into the city for that or have a friend from there bring it down for you or order online. Did I mention how much I HATE it here? We moved here needing a place with lots of land and a big house, but it’s so BORING and so many rednecks here as well(also known as “White trash”) and it’s a horrible, depressing,hopeless  place to live. I’d LOVE to move, but the truth is we just can’t afford it. As well, a house our size(3 stories, 7 bedrooms on 1 1/2 lots of  land) would easily cost at least 1 million $ in a city(not that they’d have the land for it) and anything in the price range we bought our house for here  would be twice as small but would cost TWICE as much(if not more) anywhere else, and there’s also the extra 10 000$ expense for movers, lawyers, real estate and the like.Moving is such a hassle anyway and I’ve moved easily at least 15 times in my life, probably more, and I hate it, esp. the packing is the worst. When we moved here the last time I swore I would never move again. What I think I WILL do, however, is once the youngest(now age 3) graduates highschool (and I’m done homeschooling)I will go off to Africa and do missionary work.Man, I sure miss the city. I grew up in cities and until  a few years ago it was all I’ve known(except for camp and the cottage out in the country and visiting relatives who live there but it’s not the same as actually LIVING there full time yourself). Now, there ARE some things I DO like about living in the country(just NOT this particular town) such as the sound of crickets, the smell of wildflowers, the sounds of chickadees and many other various birds to hear and watch,the trees, the fresh air,spacious backyards, the lack of crowds and everything “squished” together like in the city. Wide-open spaces, the woods,the quietness. We do live in cottage/ camping country and city people come here all the time(mainly in summer) for cottaging, camping, canoeing, fishing, hunting, etc.it’s just this town is so shitty and run down and there’s nothing to do and nowhere to go.It’s boring and there’s limited access to so many services, products,etc. and we have to make do without so many things or else go far out of our way to aquire them, that at times you wonder if it’s even worth all the effort and travel time.That’s my rant for the day. I feel better now.BTW, the kids hate it too and the older ones miss the city and that’s why they went away to university(as opposed to going somewhere closer) and they swear they’d NEVER move back here(or to ANY small town) ever again; they KNOW what else is out there(and only the youngest 2 were born and raised here; the others remember what city life was once like)and will only ever live in cities from now on,and in fact, even hope to leave the country as well and live abroad.We have travelled extensively and have seen what it’s like in other countries as well(and like it) but that’s another blog entry for later! 🙂