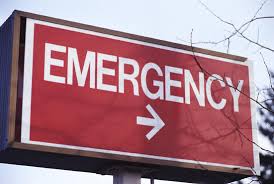 My headache was so off the chart when it woke me  up I was crying in pain and felt nauseated and dizzy and my balance was off.I have always had immobilizing headaches but this one was the worst of the worst! It was a 12 on a 1 to 10 pain rating scale.It was the breaking point, so I went to the ER.It was only 4 hours and they saw me right away and said my BP was high(161/95) and gave me a 4 drug IV “cocktail” (it took 7 painful pokes and tries to get the IV line in and now my arms are all bruised! I HATE IV’s; for me this is the worst medical procedure, even worse than spinals!!!! The one thing I dread the most! My veins just do NOT ever cooperate!) they guaranteed works instantly(and they ran the 1  litre in over an hour period) for all common headaches(cluster, stress, migraine,sinus,anemia, high BP,etc.) but of course for me it didn’t(and they almost even seemed mad at ME, and accusing,maybe even disbelieving, as if I was some sort of street junkie looking for a fix or something, that it didn’t!) so they put morphine(which kills ALL pain regardless; I’d had it after surgery before and it works well) which did clear up the headache(it also caused me to see the tiles on the ceiling “moving” and made me feel hot and even dizzier as well as tired)and at one point I was chilled,shaking, and my teeth kept chattering, they said was because they were running it thru my system quickly, and then they sent me home. I was hoping they’d at least do some tests(CT or MRIscan, bloodwork,etc.) to determine the CAUSE (all they did was take my temp, which was normal, and the BP); they eliminated the symptoms(the pain) but not the cause, so of course they will only return! I have always suspected a brain tumor but they wouldn’t believe me! They weren’t mean but they weren’t exactly “nice”,either, and they claimed I couldn’t be in too much pain as I was talking with my husband…..but it was a distraction, and the same thing happened 3 years ago while prego when I had my liver disorder; they said I “didn’t look or act sick enough” and that I “should have just been laying there and not even moving if I was that sick and had it”, except it turned out I DID have it,afterall(as rare as it is, but I always seem to be the unusual case, the rare reaction/complication/statistic/exception,etc.) I guess I need to act and look sicker from now on? I don’t whine and complain enough, or what?I have to put on this really sickly looking and pitiful face and moan and groan, now on? They also chided me for my nervous chattering(I tend to prattle on and talk and talk and talk when I get scared or nervous.) I felt so embarrassed, like a scolded child.I did get a prescription for 2 meds: one for the headache I take as soon as I feel it coming on, and a muscle relaxant for the sore stiff neck I always get with the blinding headaches. It cost 120$ so I sure hope they work,and for that price I only got 50 of one and 60 of the other, to be taken 2 at a time,up to 4 times a day.They directed no drinking alcohol ,driving, or operating heavy machinery(so there goes MY plan; Iwas planning on driving to the bar and then operating the forklift! Just kidding; I don’t even drink OR drive, in fact!) The doc also suggested I find a GP for follow-up, but I was hoping I’d be tested there, at least preliminary, I mean, what if it WAS a brain bleed, a stroke, or aneurysm that couldn’t wait? They dismissed my other symptoms as well, like saying my brain fog and mental decline is just “stress”. Yeah, right, I KNOW myself and my body; I wasn’t this way before(and I’ve always had an immense fearful, anxious, worrisome,high-strung, stressful life) this is NOT normal and it’s getting worse and I KNOW something is very wrong! For the naysayers that say I’m a hypochondriac, I am NOT; I don’t IMAGINE I am sick; the symptoms ARE real, I just don’t  know what’s causing them, and apparantly neither do they, and weren’t interested in finding out. I am glad I did get relief for the headache, but still no answers, and I feel one coming on again now, in fact, so I’ll try my new pills and hope they work, but it’s just a temporary solution; until the cause of it is found and dealt with, nothing will improve.Shit.