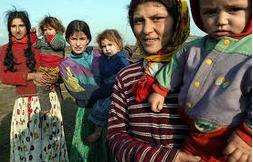 The persecution, racism and outright hatred and discrimination of the Roma(what used to be known as “Gypsies”) people in Europe greatly bothers me. I don’t like discrimination against any people, be it Blacks, Arabs, Jews, etc. or anyone but what is going on now across Europe(France, Italy, Czech Republic, etc.) is increasing and inexcusable. They are deporting Roma, they are targeted for vicious attacks, smear campaigns, victims of violence, they live in shacks or tents  in ghettos in sub-standard conditions(incl. no electricity, no garbage pick up, and one water pump to serve dozens of families) they live in dire squalor and  poverty(like  a Third World nation but this is Europe we’re talking about here!), have limited education and high unemployment and are generally refused employment. They are outcasts, hated and shunned, and treated like second-class citizens. This is just wrong and unacceptable. NO people should be segregated, ostracized and discriminated against in this way. They have been persecuted through out history and were also targeted for extermination in the Nazi death camps.They are generally a nomadic people and live in caravans, tents or refugee cities and move about from place to place.It reminds me of how I saw the Palestinians living when I was in Israel; in ghettos and in less-than-ideal conditions,and esp. as compared to the other citizens. Racism is alive and well everywhere in the world today and it breaks my heart. I pray for the Roma people and for all others who are being treated as less-than-human. What’s WRONG with people? How can they hate an entire race of people like that and hold them back socially and economically? I guess history DOES repeat itself and people haven’t learned from the sins and evils of Nazi Germany and WWII.It hurts me even more as I have always had a special love of Europe, a connection to it, have been there many times, and have always held a special place in my heart for it,and to hear they are treating people this way(esp. when back in time they weren’t racist; in fact in places such as France they treated Blacks with respect while racism was prominent in the 1960’s and such in USA!)it pains me greatly to see them behaving this way. Europe is a collection of MANY various ethnic groups, languages and cultures.There is a place for everyone, incl. the Roma.