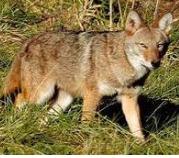 I heard on the news there is a pack of coyotes in this area and that they killed a small dog. Our dogs are outdoors most of the time(inside overnight) so we have to keep a closer eye on them! I know we live out in the country but this still somewhat surprised me. I have seen several raccoons, skunks, chipmunks, groundhogs, squirrels and even a few deer, but this is something else. There have even been bear reports at times as well(not now, however, they’re hibernating) Not too likely they’d be able to jump our high fences and get into the enclosed yard though, and I’d think they’d come out more at night(when the dogs are indoors) and not too likely to come too close to people, but we’re keeping an extra “eye” out just in case, although in all honestly I really wouldn’t care if they got Wilson; that thing is one nasty beast; aggressive and vicious and I wouldn’t miss it one bit; I hate that dog,and meeting a violent end for such a fierce dog would be sort of ironic.It’s also a good thing I don’t leave the kids out in the backyard(or anywhere outside for that matter) alone though; coyotes have been known to attack people,too, we just have to be more watchful.Such is country life, I guess.