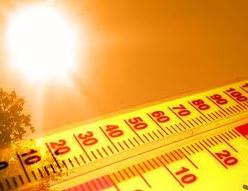 Yesterday was the hottest day ever and broke alot of records! It was 33C with humidex of 47 C which equals 91.4F and 116.6F and inside the house got to 90F and even running the central a/c for 6 HRS(we normally don’t even put it on until 19:00 when hydro rates are the cheapest rate but it was so hot yesterday we had it on from 14:00, who CARES!) it only went down 2 degrees and we couldn’t even tell the a/c was ON; it’s still so hot and the a/c couldn’t even keep up with the heat! We swam in the pool most of the day to cool off and I’m still all water-logged and wrinkled like a prune! We’ve had a heatwave for a week so far with no end in sight soon…On the news they said 2/3 of the country is under an extreme heat alert just like most of USA is as well; most of North America is ,and it’s so hot I felt like my eyes were melting! Being stupid as I am, I was still out in the sun for 4 HRS; 2 HRS of that in the pool, so I think I might have fried my brain, ha ha ha!

My mother also saw a theft and had no idea! What happened was she was sitting out on the front veranda and saw 2 men load a motorcycle onto a truck and drive off and thought nothing of it, figuring it was the owner perhaps taking it to be repaired….that is, until a neighbour came over and asked her if she’d seen anything; that he was away and someone stole his motorcycle out of his shed! That was it, but of course she had no idea at the time! Poor guy, I hope he gets his bike back! There are LOTS of robberies here; they steal EVERYTHING, even laundry off clothes lines! No joke!!

I had a weird dream as well that the Royals were over for dinner and I was embarrassed as all I had to feed them was a few chicken nuggets! I also got to speak with the Queen, Princess Anne, and Prince William, who told me he wished he had more privacy and more of a “normal” life where he could go and do things without security and photographers everywhere; that he could go about unnoticed, unrecognized,and unbothered! I also admonished my hubby about behaving “properly around such distinguished people!” It was weird! We have our new priest as well, also from Nigeria, and he didn’t seem friendly like Fr. P but he’s new and maybe he was just shy and nervous? That’s it for now!