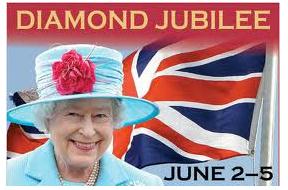 It is now Queen Elizabeth’s Diamond Jubilee, that is, 60 YRS on the throne (and no one has had this since Queen Victoria) and say what you will about Britain’s Royal family, but this is still quite an accomplishment! She became Queen in 1952 when she was 25 YRS old. Over a 4 day period now there’s a huge Jubilee party in London(I was there myself a few YRS ago and I liked the city but it was so expensive!!), from a 1000 boat flotilla down the Thames River, to fireworks, picnics in the park, massive crowds,a carriage procession, a concert, and an extended holiday, it certainly is a spectacular event!

Living in a Commonwealth nation there is extensive news coverage of it here as well,and although I don’t care for her either way( I’m indifferent)and she’s Britain’s Queen, not ours(just merely a figurehead and she’s on our money) it’s still pretty amazing that she’s been reigning now for 60 YRS and is something to be celebrated for sure,and boy, what a party!!

As well, they caught the psycho “body parts” killer in Berlin,and my 9 YR old quipped,”I guess HE’S Europe’s Most Wanted NOW!” referring to the tag-line of the movie “Madagascar 3” and I heard in India they’re having a heatwave, the worst since the late 1800’s, with temps 45 C to 50 C and people have died; I guess it’s good I’m NOT at the ashram,afterall(I was originally to have been there now until the end of June!) as I would just DIE in that heat! (here we think it’s hot at 30C!) and I hate it my legs are so fat I can’t wear zip-up boots,and I noticed all of a sudden my upper stomach area’s really swollen and fat(and I’ve been extra tired lately, too) so I wonder if my gallbladder’s maybe inflamed now? Surgery’s in just 2 more days as well and they’ll be calling me sometime today or tomorrow to tell me what time I have to be at the hospital but I would guess around 7-8 am….