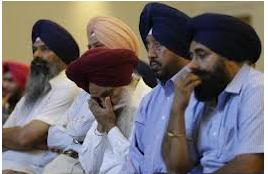 I was dismayed recently to hear of the shooting on a Sikh temple in Wisconsin and people were killed. As it turned out it was a neo-Nazi white supremacist and he had mistaken the Sikhs for Muslims(not that it makes it any “better”; he shouldn’t be targeting ANY religious group or shooting anybody). It’s so tragic and sad; people should feel safe and at peace at a place of worship, yet religious sanctuaries of all faiths are increasingly being targeted for attack. There have been attacks of Christian churches in Nigeria recently as well, hate crimes and graffitti  at mosques and synagogues,etc. It’s also interesting that they haven’t referred to it as a “terrorist” attack because the shooter is a caucasian American and NOT foreign(esp. Muslim) even though that’s exactly what it was.When these attacks occur there is always a debate if USA should have stricter gun-control laws as well but it never gets anywhere as powerful gun lobbyists like the NRA fight it at every turn with their “right to bear arms” crap, as if their right to bear arms is more important than other people’s right not to be shot and killed by some gun-toting, gun obsessed psycho! I think people’s right not to be shot at is more important than some gun-slinging yahoo’s right to carry a gun,and in USA it’s as easy to get a gun as it is here to walk into a store and buy a pair of shoes! You can but it pretty well anywhere there whereas here it’s tightly regulated(I don’t even know where you’d even buy a gun;what kind of store even sells them) and you need a special license and permit and have to take a course first and pretty well only the police, hunters, and criminals even have them here. It’s an entirely different world and we don’t have the rate of gun murders or attacks like they have there. It’s like the Wild West and unless something is done and changes are made the killings and mass shootings are going to continue and only keep getting worse.American’s obsession with guns just baffles the hell out of me.

As well, I saw a gold Jaguar drive down our street so they were either REALLY lost or visiting from out of town as no one in THIS shit-hole town would have a car like THAT,and if they DID it would be stolen and vandalized in a second, and I found out more  side-effects of my new pills also incl. hair loss(as if I’d notice, although I guess my hair wouldn’t grow so I wouldn’t have to shave it) “acid” in my blood, glaucoma,and change in taste, esp. affecting carbonated beverages and I DID notice with my Diet Pepsi right after the first dose….but I didn’t realize and thought they’d just changed the recipe as it tasted alot more carbonated and more bubbly, but it was due to the pills! Our travel agency also called us and told us our travel agent is in the hospital and that it’s “serious” (they didn’t say what it was but said it wasn’t a heart attack; is it cancer? a car accident? did something rupture? emergency surgery?) and we have a new travel agent and she needed our info, and the 5 YR old was name-calling again so I scolded him and my mother excused him as always and blamed the other kids(as always) and then acted like a complete and utter redneck by loudly yelling and screaming  at me outside in front of the entire neighbourhood to hear, yelling at me “Oh, FUCK- OFF!” She really IS a piece of work! It took all my restraint to NOT haul off and punch her in the mouth! I’m so sick of her always coddling and pampering him, hassling me ,meddling,and just being an overall bitch! Can you imagine what my childhood was like growing up with a mother like THAT?