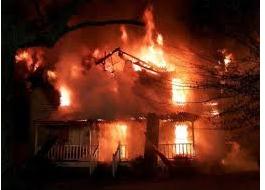 Ok, now this is interesting….and then it gets even more interesting: I heard on the local radio news that there was a fire 2 streets over from us and that the mother and 4 kids only escaped at 4 am because they had working smoke alarms. Then I found out that the fire happened to our former neighbours; the ones that used to live next door to us for a YR until they trashed the place and got evicted,and then it gets weirder: now they’re staying with our next door neighbours(as the rednecks here all know eachother) and I saw the arson investigation unit was over next door talking to them(and I heard the woman say “I have a permit for it” so I assume they must have found a gun but I would assume their drugs would have burned up in the fire so no evidence there) and they were there investigating and questioning them  for a good 90 minutes which I find odd as with fire(and we know this from experience after our fire) it’s the fire marshal that routinely investigates every fire and only if there’s suspicious/ criminal activity suspected do they get the arson squad involved, so they must think the fire was deliberately set and obviously THEY didn’t set it themselves when they were IN the house! This sickens me to think that someone set it on purpose( having a fire is bad enough in itself but it’s even worse when someone has purposely set it) to try and kill them; I don’t care WHO it is or HOW bad they are; NO ONE deserves to be burned alive like that and it’s scary to think whoever’s after them now they’re staying at the neighbour’s next door too what if they mix up their house and ours and torch OUR house mistakenly thinking they’re staying with US instead of next door? There’s so many evil people in this world with alot of them right here in this town! I can’t WAIT to get OUT of here!!

My hubby,being the nosey parker that he is(I just speculate privately but haven’t got the nerve to go ask) actually went over there and ASKED them and they SAID the fire was caused by their dryer, but I think they’re just saying that; afterall, why was the arson unit investigating it instead of just the usual fire marshal? I know how terrified they must be as well having an enemy after them as we’ve been there ourselves as well and know what it’s like to be terrorized, to have our safety in jeopardy and to have to flee and just disappear one day without telling anyone; family or friends where we’re going, just leaving our home, family, friends, and life behind, not being able to look back or go back, not being able to ever contact anyone ever again, having to start over always looking over our shoulder, hoping they never find us,living in fear, our sense of security shattered forever, our lives divided into “before” and “after”, never feeling safe again, never being the same again, having our lives forever changed,never being the same as we were before. I wouldn’t wish that one anyone. I also know what it’s like to rebuild after a destructive fire. Those poor people are going to need alot of time to be able to rebuild and to heal and knowing what we do about them I’m sure they have lots of enemies.

As well, the kids were having good old-fashioned fun like I had as a kid: they were sitting on the skateboard holding on to the skipping rope being pulled down the street, shrieking and laughing, having fun, being outside away from the computer and video games and it was nice to see,I saw a cute guy and wondered why *I* couldn’t have married someone like that (oh, yeah, it’s because I’m ugly, that’s why!) and the 9 and 11 YR olds are obsessed with this “gay” boy band called One Direction and it’s so embarrassing and this pussy music makes me want to throw up in my mouth,and last night a redneck was shooting off fireworks outside my bedroom window and woke me up and scared the bejesus out of me!