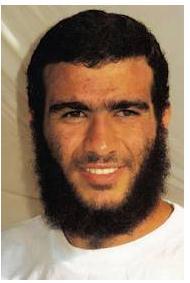 Omar Khadr is Canada’s shame. It is shameful how Canada left him abandoned to rot and be tortured in an American prison for 10 YRS  and how it took this long and had to be basically forced by the Americans before they finally took him back even though as a Canadian citizen he had the right to be returned home years ago. Now he is finally home in a jail here. Previously he was in the notorious Guantanamo Bay ever since he was a mere boy, just 15 YRS old where he was regularly tortured and beaten and where he gave a guilty plea in order to be given a lighter sentence and to be extradicted in a YR(actually it ended up being 2 YRS; they lied.) There was never any proof that it even was him that threw the grenade that killed the American medic in Afghanistan(and he himself had been shot in the back and the doctor that examined him said it was doubtful that he was in any condition to have even thrown a grenade) and of course no mention of the fact that the Americans were the invaders and that Omar as a child “soldier” was just defending from invaders. He was detained for years without trial as well and when he finally had one it was by a “Kangaroo” court. It was all a farce and his rights were grossly violated and it was a huge injustice.Guards at the prison also said how they all liked him and that he was polite and the model prisoner and not like the others. Human rights organizations have been decrying his mistreatment and the injustice done to him for years.Soon he should be on parole for time served but the damage has been done and it’s doubtful he will ever have a chance at a normal life. He has lost his adolescence and psycologically he will be scarred for life.He has no job or life skills. Omar Khadr is Canada’s shame.He has been thrown away and is this nation’s dirty little secret.

As well, we now also have the largest beef recall in history in this country due to E- Coli contamination once again,and it makes me even more glad to be a vegetarian, and a news report says that 5 million Canadians cross the border annually to take flights out of USA rather than fly out of this country as it’s 30% cheaper there. Airfare is so expensive here due to higher costs, high fees, surcharges and taxes( 40% of the cost of airfare here  is taxes!) that even driving across the border to an airport in USA(or taking a coach bus there)is still cheaper than flying directly from here.My cousins do this all the time in fact; they fly out of Buffalo instead of Toronto and an example is to fly to Las Vegas from Toronto costs around  500$ but from Buffalo only  around 200$.Many people go across the border to shop for the same reason,too; cheaper prices and better selection and then this gov’t bitches and whines the economy here is losing business but too BAD! They should lower the prices and the taxes then and be more competitive; none of this “Buy Canadian” crap; people are going to shop(or fly) wherever it costs less! We’re tired of always being over charged and ripped off all the time!

The more traumas I have in my present  the more I want to go back to my past as well and I wish I could move back to Toronto,too, but we can’t afford it now, and our 9 YR old hopes we do have to move and is excited and hopeful at the prospect,and I am hoping my hubby can maybe even get transferred thru his job to a location out of the country which would be ideal and asked him if he could look in to it.He said they do have branches in India and in USA in his company and if he did get a job transfer the company might even help with moving(finding a house,etc) and with expenses too which would be a bonus and I’d finally be out of this country which I hate with a  passion and am desperate to leave.