Happy Hanukkah to my Jewish friends! 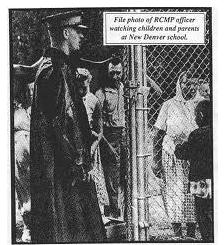 Have you heard about the Doukhobor children abduction by the British Columbia gov’t 60 YRS ago? The chances are that you haven’t,and in fact, neither did I until I saw a documentary on it the other night. It is one of many of Canada’s secret hidden shames from the past,along with interring Japanese Canadians in camps during WWII as “enemies of the State”, snatching Native children from their families, homes,and communities and given to white families and forced into “Residential schools” to squash their heritage and “assimilate” them into “white” culture,and recently seizing kids from a polygamous community also in BC,etc. Apparantly this country has a history of abusing human rights and continues to do it to this day, stomping on people’s cultures and religions and forcibly removing their children.The more I hear about how fascist they truly are the more and more I hate it and my greatest pleasure would be to leave this country, to renounce my citizenship,and to never look back.

In the case of the Doukhobors( or “Spirit Wrestlers”) they were Russian immigrants, a group of 6000 who settled in the Kootenay Mountains of BC where they lived a religious communal life shunning the modern world, where they wanted no gov’t interference in their lives and didn’t reg’d births or deaths and homeschooled their children.They were pacifists who were persecuted by the gov’t(mainly for not sending their kids to public school) and in protest they would rally in the nude(for they were nudists, for which the gov’t punished them with the iron-fisted punishment of a 3 YR jail term) and set fire to their homes protesting land seizure by the gov’t, compulsory education,and materialism. There was also a “splinter” group among them known as “The Sons Of Freedom” that were more militant and anarchist.

In 1953 the RCMP in a military-precision night raid descended upon the community and snatched up all 175 of their children(who up until this point had happy peaceful lives and enjoyed happy peaceful childhoods)hunting them down like the Gestapo hunted the Jews  and herded them off to a prison-like institution called “New Denver” where they would spend the next 6 YRS being indoctrinated and brainwashed by the State, a social experiment to turn them into patriotic Canadian citizens, where they were systematically abused and molested, and where their identity, culture, language and religion was forbidden and to be erased and re-programmed, and they were beaten if they spoke their native Russian, their civil and human rights violated on every level.

During this time of incarceration they were also identified only by numbers, like the concentration camp victims of the Nazis. They only saw their parents every 2 weeks for 1 HR, separated by an 8 foot high fence where they were forbidden to have any physical contact. They languished like this for 6 YRS, until 1959 until the parents agreed thru the courts to send them to public school and then they were released back into the custody of their parents and communities but by then the damage had already been done; being jailed turned the boys into angry broken damaged young men that were ripe for vengeance on a gov’t that had destroyed them and within 18 mos. of their release 50 of them had become terrorists and fought back by bombing; over 300 bomb attacks had taken place between 1960 and 1961 based in their community. The gov’t social engineering of these children to brainwash them had gone horribly wrong and backfired and even the others that hadn’t ended up like that were still scarred for life and didn’t go far in their education due to the scars of their childhood and forced public schooling; it is a trauma the victims say they will carry with them for the rest of their lives and that they never forget, not even now, 60 YRS later and a wrong and an atrocity that the gov’t still is unapologetic for and has yet to apologize for; they still don’t think that they even did anything wrong.

This just breaks my heart and it still happens today. This country is NOT “democratic”. We DON’T have the rights, liberty and freedom that they want others to think. We have our rights and freedoms steamrolled over all the time and it doesn’t get any better. This is a fascist country that indoctrinates and steals our children, forces it’s will on it’s citizens, incarcerates those that are not “mainstream” or that protest, and that tries to “rehabilitate” those of other cultures, forcing them to give up their identities and backgrounds(cultural genocide). Civil rights and justice issues really matter to me and get me infuriated when they are violated and this country continually proves itself to be the first of the worst, not just in the past but in the present, both with all of it’s dirty little secrets it tries to keep hidden in the past and the secret shames it  continues and tries to hide in the present.