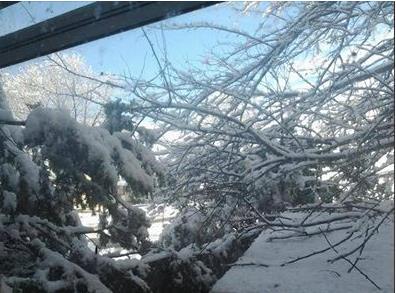 We FINALLY got snow at long last! A few days ago we got flurries for about 5 minutes but now we got REAL snow where everything’s all white! We got 13 cm with 5 cm more coming! The 6 and 10 YR old’s spent HRS playing outside in it and making a snowman and my mother and the kids have the camera with them in the Caribbean so I improvised and took the photo seen here with the Tablet instead, so enjoy!  School buses were all cancelled here but my kids complain since we homeschool that they never get snow days and still have to do school( they get to go out and play in it but not until school work’s done first!)The 19 YR old also threw out my pills so I made him pay for new ones as the rule is if you throw something out, lose it, or ruin it you either fix it or replace it, and the 12 YR old said to my hubby, “Pay attention to ME, I’M the pretty one!” and when I said, “What about the 10 and 14 YR olds? They’re cute,TOO!” she huffed,”They’re ugly cows!” and my hubby didn’t wash the pot he used,either, and told the 10 YR old to wash it for him( lazy, now I know where the 19 YR old gets it from;he just leaves his dishes in the sink and expects someone else to wash them for him,too) but my rule is if you cook with it you wash it,if you eat off it, you wash it. I’m not doing everyone’s dishes; they’re not crippled ,and there’s no reason everyone can’t wash their own dishes and clean up after themselves! I’m not a slave!(“Just because you have a hole in your arse doesn’t mean you’re crippled!”)

As well, my old friend’s(I’ve known for 25 YRS) best friend from highschool died (I think he had cancer) and it makes me feel really old now,too, that people my age are DYING, and they said there’s going to be even MORE redneck hockey on TV now which’s ALL I “need” as it already monopolizes the TV, takes over the news, and pre-empts the TV shows all the time as it is and I’m sick of seeing it everywhere as it is now and certainly don’t need more of it: I wish it wasn’t on at ALL and when they were on strike was the best, and on the news they said of the developed world that seniors in THIS country live in poverty the worst( it figures; Canada sucks) and the Auditor General’s report showed rail safety and food safety in this country is poor as well( no surprise here; we always lag behind other countries) with inspectors poorly trained and follow-up is lax, and a Facebook friend’s husband’s getting his gallbladder out in 2 weeks, and he just had the ultrasound this week and I had to wait 3 MONTHS to get a surgery date from my diagnosis and by the time I had mine finally removed it was so full of stones and so inflamed it was on the verge of rupture!

Iran also agreed to a deal with 6 or so other countries limiting it’s nuclear capabilities to energy and not weapons in exchange for harsh sanctions being lifted yet even so this stupid country refuses to ease them, saying they don’t trust they’ll keep their end of the bargain, not even giving them a chance, wanting to be hostile instead of diplomatic( once again, Canada sucks) and my friend who had her brain tumour removed found out it IS cancer,afterall(after initially the biopsy said it wasn’t when they checked the fluid, but examining the tumour itself they did find cancer cells) so now she has to have chemo twice a week for 5 months and until now she’s never had surgery or even been in the hospital and she’s 41, and  I found out as well a Facebook friend’s fiance beats her up(and it isn’t the first time,either) he punched her and broke her wrist yet she refuses to leave, saying she loves him,can’t lose him, he “didn’t mean it”, and they’re going ahead with the wedding and I’m really worried about her! I was shocked and surprised too as he seemed so nice and they seemed so happy but I guess you never know. Today’s the American Thanksgiving,too(we already had ours back in October) and they make a much bigger deal about theirs than we do about ours, and in fact, for them it seems to be an even bigger holiday than Christmas!