Here is a hippo puzzle that the 10 YR old found online( some of the pieces; they all wouldn’t fit in the frame when I print screened it to get the picture) before it was completed. 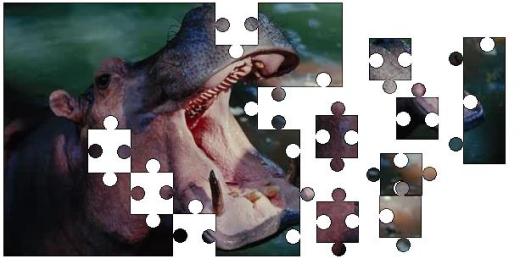 Next is the puzzle partially completed. You use your mouse and move the pieces around your computer screen until you get them into the right spot.

…and here is the completed puzzle. They say the average is about 5 minutes to complete but it took her around 7 minutes. I didn’t even try because I haven’t got the patience or the co-ordination for puzzles and it only frustrates me and I really don’t need the aggravation as it only makes me feel dumb.

Down the street they have Christmas candles in the windows just like my grandparents used to have when I was a kid growing up in the 70’s ( similar to the ones seen here, only with the “flame” orange; I couldn’t find a photo of the exact same ones) and it brought back so many happy memories for me of my childhood Christmases,like travelling back in time: of me visiting relatives, of eagerly awaiting the Big Day, awaiting my gifts, the Avon items we’d ordered, waiting for Santa, playing in the snow, decorating and putting up the tree,  the blue and green garland,   the foil stuff we put on the ceiling, 2 weeks off school, spending time with friends, exchanging gifts with friends,ice skating at the outdoor rink, counting down the days, Advent calenders, playing in the snow, singing carols in school(back when they used to allow it, before they banned pageants or anything to do with Christmas) sneaking around trying to find the presents ahead of time,etc. it was always such an exciting time when you’re a kid. I used to believe in Santa,too, and once I found out it was all just a big hoax I felt so deceived, so betrayed, so lied to,and so stupid and gullable for having ever believed it. Even when I had my doubts later in childhood I still believed once my trusted cousin( who was 9 YRS older than me) said she heard noises up on the roof and saw reindeer footprints in the snow and I knew SHE( of ALL people) would never lie to me( so it HAD to be true!) and once I found out I felt so cheated,esp. at my mother for lying to me all those YRS. but Christmas was always a magical time for me as a kid and I have so many happy memories of Christmases back then.

As well, yesterday was the Cadets Christmas party but I never went as I don’t like to socialize and “mingle” and I always feel nervous, uneasy,and awkward around people(and even worse around LOTS of them or if I don’t know them) and my hubby scoffed that I’m “not part of this family” either because I don’t play their stupid jeuvenile games( that are retarded and embarrass me) which incl. telling other people that my hubby’s an “alien” from outer space, and saying “oomph!” every time we see a motorcycle, etc. and he’s sick now,too(like the 15 YR old was) and barfed a few times,and then kissed me right on the mouth(so I’d get sick,TOO) and I told him if he got me sick now I’ll barf right on his FACE! My mother also calculated with her budget that we’ve spent 21 000$ so far this YR in groceries, and that’s only buying everything on sale!! The cost of food here is astronomical!

I also had a dream there was a black bear in our back yard, the 10 YR old and I did baking together, and I’m so fat(I’m like a hippo) I broke the box spring of her bed I’m so heavy; I was putting the sheet back on her bed( which had “peeled” off the corner) and I had to lift up the mattress to do it and  I stood on the box spring  I weigh so much I heard a loud “CRAAACK!” as I did and now I’m so mortified! Our oldest also said I’d like Calgary( where he lives) as they get lots of snow and they’re conservative (and not liberal like here) and, unlike here, they don’t “censor” and ban Christmas and are actually allowed to SAY “Merry Christmas!” and have it displayed in stores; not like here where the Politically Correct Police forbid it; we can only say(and have displayed in ads, etc.) “Seasons Greetings” and “Happy Holidays” and due to the Enviro Nazis starting from the New YR the irridescent light bulbs will also be outlawed( more fascist Police State tactics again!) as well and only enviro-friendly ones allowed(instead of giving us the CHOICE they have to ban, regulate,and control everything) and it’s been 15 YRS already we’ve had the emissions test(which costs 35$) forced on all drivers (and if your car doesn’t pass you can’t renew your driver’s license) which is nothing more than a cash grab for the gov’t and more Big Brother policies,and I heard on the American radio station an ad and they mentioned  30 YR fixed mortgages for homes too which we haven’t been able to get in this country for YRS; the most we can get here is for 5 YRS! I HATE Canada so MUCH! You have no idea how incredibly much it SUCKS!!