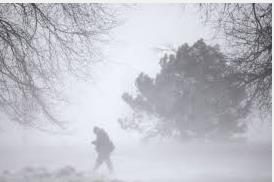 We’re having blizzards, and snow squalls all this weekend with a total of about 25 cm of snow between Friday, yesterday, and today, and yesterday we had such a bad white-out you couldn’t even see a thing and many of the highways were shut down due to accidents( around 1600 of them!) and unsafe driving conditions, it was treacherous to drive, there were alot of accidents,and people were stranded and snowed-in! We have so much snow it goes up to the 15 YR old’s knees, our inground pool in the backyard is completely buried and you can’t even tell there’s a pool there, the garden statues are completely buried,and snow drifts are so high, some are 5-6 feet high and almost go up to the top of the fence! It’s insane! A neighbour with a snow plow luckily plowed out our driveway( he took pity seeing the kids out there with their shovels) and at least we’re getting a break from the frigid cold; it was just – 4 C yesterday but all this snow is unreal! The 10 YR old wanted to play out in it but we can’t even open the back  door!

As well, now 2 out of our 3 toilets are broken  and don’t flush( and one of them doesn’t even have any water going down) and I just wish that for ONCE things worked the way they’re SUPPOSED to, and now I’m older I realized that I’m now older than most of my highschool teachers were then( so now I feel REALLY old!) and I heard on the radio that most corner stores here sell bongs, which means this is a nation of potheads,  and here your blood alcohol level has to be above 0.5 to be considered a drunk driver but I heard in Florida it’s 0.4 so once again here people are loser boozers and it’s made easy on them, encouraged,and the standards are so low ( and the usual punishment is just losing your license for 3 days or so, hardly much of a punishment) so no wonder this country has one of the highest rates of drunk drivers in the world, not surprising with all the rednecks, and they said with that fatal fire at that nursing home in Quebec(where 30 or so people are either dead or missing and the bodies are now entombed in 60 cm of ice from the fire hoses’ water that froze under the extreme cold, turning to ice) they think it was caused by careless smoking,too,yet another loser, and with the way things go they probably weren’t even one of the ones that were killed,either, and the firemen wouldn’t enter to rescue trapped victims,either, as it was “too dangerous”( but brave policemen went in instead and pulled people out) even though that’s their JOB! I can’t BELIEVE it!(but I can’t say I’m surprised!) Canada sucks!