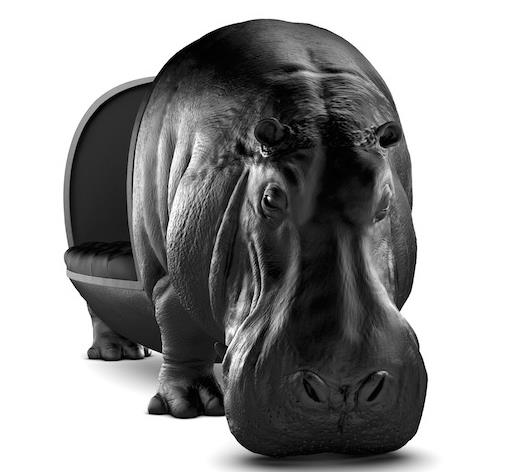 How amazingly awesome is THIS? A leather chair like a hippo! I just LOVE it and would LOVE to buy one……..except for the fact that it costs a whopping 95 000$

But man, oh, man, would I love to sit my ass down on this! This is my luxury dream item, for sure!

Well, that didn’t go over well, and, in fact, went even worse than I thought! I told my hubby about Buddy(although just about “babysitting” him for the 2 weeks; I never even mentioned about possibly even keeping him long term yet) he exploded into a rage, yelling and screaming at me,reducing me to tears, crushing my hopes and dreams, not even considering it or giving it a chance, saying I “broke the rules” wanting to get any more pets, and then I “have to pay him 2000$” and said if I still get him anyway that he’d just open the door and let him out to run onto the road to get hit by a car and then tell Patti that *I* did it; that *I’m* not responsible and didn’t look after him,and threatened as well that he won’t take me to the Tom Petty concert either and that I’d have to find a way to get to Toronto myself! Who does he think he IS though, threatening and blackmailing me like that? I’m NOT one of the kids and I feel like a prisoner in my own home; I can’t do anything, buy anything, or go anywhere without HIS permission, like I’m his hostage! It’s bad enough and disappointing enough that he said no, but it’s even worse that he was so mean about it! Now I hate him even more than I did before! He’s such a prick. I think it’s his job to destroy every dream I have.

He also raged that Dachshunds are “ugly” and “stupid” and that he should just “put it in a bun and roast it on the BBQ and cook it and eat it” and said he’d refuse to even drive me to the store to buy food for it; that the kids or I would have to walk to the store and get it ourselves, that he wants nothing to do with it, even when I told him that the kids and I would put our $$$ together to PAY for it, and even telling him the dog’s house broken it still didn’t make any difference, not even when I said we’d be helping out a friend( then he said the dog must be trouble she’s trying to “unload” onto me) and how he’s always going on about helping people…or is it only when it’s convenient for him…or is he just a hypocrite,and then he sneered, “That’s YOUR job!” My mother even blames me as well saying it’s my own fault for not taking “no” as an answer but I’m so sick and tired of always BEING over-ruled and vetoed and never having any say even though I’m one of the adults and I live here, TOO, and I stood up for this and it really means alot to me,and now the kids are disappointed and I’m devastated, not only because we can’t get the dog( unless by some miracle he thinks it over and changes his mind) but of also the way he always treats me; how he threatens and blackmails me he won’t drive me places if I do something he doesn’t like or I don’t do something he wants yet I’m powerless; I wish I could just leave but where could I GO? I just wish when I go back to the Caribbean in the fall that I could stay there and never come back….

My hubby also thinks now I’m on Prozac that I shouldn’t get mad or upset anymore either but it’s not a magic formula and  nothing else has changed; I still hate my life, my family are still assholes, my hubby still treats me like shit (and continues to insult the city as well, knowing I love it and miss it and want to move back) and I’ll never be happy. I wish I could crawl inside myself.

As well, the 16 YR old broke his toe in jiu-jitsu…..and he has a tournament in 2 weeks!