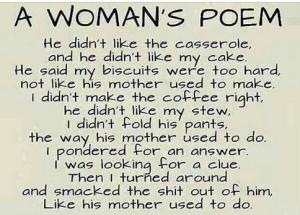 -“Fishing” for change out of the phone booth when I was a kid.

– Catching frogs in the pond at camp as a kid.

– My friend G taking me for rides on his motorcycle in August of 1988. I would hop on the back and we would roar off into the night. It was so exciting and even now every time I see a motorcycle I still think of him.

– My best friend and I taking the streetcar downtown dressed as hippies.

– Being in the back of my uncle’s Station Wagon as a kid and making faces at the drivers in the cars behind us.

– Going to Centre Island and bringing my pet gerbils with me in a plastic lunch box with holes poked in it for breathing.

– Flinging the swings up over the poles at the park.

– Moving into our first house when I was 12.

– Putting “Sun-In” in my hair as a teen and having it turn all “brassy.”

– Dancing around my living room listening to Beatles songs.

– Losing my zebra toy when I was in Kindergarten.

– When my friend T was hit by a car and broke her arm.

– Getting scratches all over my arms from picking lilacs.

– My cousin showing me how he got his cat to “stick” to the wall.

– Getting my highschool yearbooks signed.

– Jumping off the garage roof trying to fly.

– My raspberry lip balm I took to science camp.

– When I had long hair and my friend French braided it for me.

– Doing “Ass-Crackers” off the diving board at camp.

– Watching the fireworks at Parliament Hill.

– All the fun I had with my friends at the YMCA group.

– Digging clay out of the creek behind the cottage.

– Short-sheeting my mother’s bed for a joke.

– Washing my hair in the rain.

– Summer concerts at the CNE grandstand in the 70’s.

– The Icelandic sweaters my grandmother knit for me.

– Borrowing my friends’ bikes and skateboards as a kid because I never had my own as my mother thought they were too dangerous.

– Holding my newborns for the first time.

– Waking up from surgery and not remembering where I was.

– The worst thing I ever did: used the $$$$ collected for UNICEF as a kid to buy candy and still feeling badly about it even after all these YRS even though I did pay it back.

– Getting 100% on a science test and everyone accused me of cheating but I didn’t.

– Making a “milk” formula for my dolls’ bottles mixing baby powder and water. 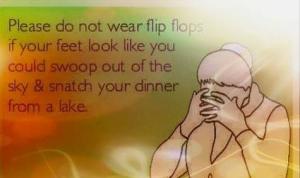 I am 48 YRS old and I still have a secret crush. Even at my age I am still not too old to have a crush, proving you are never too old to feel like a teenager. My crush is a “real” person, not a celebrity, yet I don’t even know his name. I just swoon at his ruggedly handsome looks and find myself dreaming about him and having fantasies of him ravishing my body and making mad passionate love to me. I never got to experience passion and romance in real life so all I get is in my imagination and dreams. I just get the plain old boring every-day variety; it’s like all I get is broth when what I really want is spicy curry! My crush is my age, or maybe a bit older.He is oblivious and has no idea the things I think about him. If only people knew what goes on in my head and how many things that I keep to myself; I don’t think I get enough credit for the things that I DON’T say out loud!

You are never too old to dream.

Some things you never outgrow.

The imagination is limitless and ageless.

I guess now I’ll have to haul my ass off to Confession to confess my sin of lust.

My secret crush is so secret that even he doesn’t know about it. I’m full of secrets.

I still remember “The Shoeshine Boy”(pictured here) from when I was a kid. I never even knew his real name( I now know it was Emmanuel) just the story. It’s a story I will never forget. It was 1977 and I was 10 YRS old and the story was a headliner for months due to it’s rare and horrific nature, as stories like this, although common today, were virtually unheard of back then; the world was a much safer place,esp. for kids. “The Shoeshine Boy” was a 12 YR old immigrant who  shined shoes in a seedy downtown district of Toronto and was one day lured away, abducted, raped,and killed by a pedophile. It shocked the city in it’s brutality and I remember how scared I was as a kid hearing about it,too, and I remember my mother telling me at the time to not answer the door( I was a “latch-key child” left home alone for long periods before and after school) unless I knew who it was, and only once was there ever a possible incident: someone kept banging on the door demanding to be let in and when I asked who it was all they said was, “It’s me!” and they kept pounding away but I never let them in and they eventually went away but for a kid left home alone it was frightening, esp. after this. I imagined becoming the next “Shoeshine” victim….

I never knew what happened to “The Shoeshine Boy’s” family after that, but if I were them I’d have moved back where I came from; they were better off there, and their son would still be alive. So much for coming here for a “better” life. He would have been 50 YRS old now if he were still alive. It was such a sad and tragic case as much as it was horrific. I remember when I was a kid hearing about it on the news and trying to imagine what the poor kid must have suffered and how terrified he must have been and it made me scared too, and in a way I lost part of my own innocence that day as before that I just didn’t have that fear and I was always left on my own, and I would play outside by myself and travel all across the big city on my own( it was a different time back then, the world was a much safer place and kids didn’t require the supervision they do today) and I had so much freedom to play, explore,and wander that you wouldn’t even THINK of allowing kids today but after that case I started to see the world in a different light and my innocence was shattered.

I also remember one time walking home from school(I was 10 or 11) a creepy man was following me and I was aware of it,too,so I went thru the back of Billy B’s house, which had a big field behind it which was well-hidden( probably in hindsight not a good idea) people grew marijuana there where it remained out of sight of the authorities and it was a long and winding area and you could get lost if you didn’t know it well and I eventually lost him. I was scared though and my heart was racing until I knew he was gone and I was safe. That’s the closest I came to “stranger danger” as a kid, but the real danger was from a relative who molested me from when I was in Kindergarten until I was 12 and I just knew that every time we visited them or he came to see us that it would happen if I was ever alone with him so I always tried to avoid it.I guess it is true what they say; a molester is more likely someone that you know as opposed to a stranger.As traumatic as it was, oddly I have had far worse things happen in my life that have damaged me, but due to my experiences it has also made me even more vigilant with my own kids because I know what can happen so it makes me extra cautious, and sadly today cases like the “Shoeshine Boy” are too common. 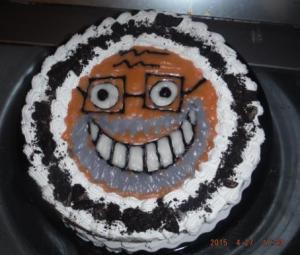 Here is the newly-minted 19 YR old’s ice cream birthday cake. She drew the face design herself. It’s supposed to look like my hubby…..and it DOES, ha ha ha!