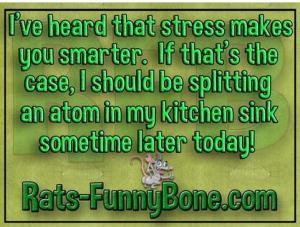 When I took Buddy for a walk we saw a Pug running around and it had a collar on so I assume it was someone’s pet that escaped from their yard. It was a friendly little fellow that came over to say “hi” to Buddy…..but Buddy got really fierce on it; the hair on his back all bristled and stood up and he tried to bite it’s face off! I’ve never seen him like that, so aggressive! I yanked him back on the leash before he could bite it and the poor Pug( which was bigger than him,BTW) ran off. I reprimanded him, using a stern voice, and told him to be nice but the more I think about it I wonder if maybe he was just trying to “protect” me? In his eyes he was just being a guard dog and was “defending” me from what he perceived to be a threat from another dog that approached us? Of course when I mentioned that possibility my hubby just scoffed I was “just trying to ‘excuse’ my dog” and “justify” it and that he’s a “vicious beast” etc. because he always says hurtful things about anyone or anything I care about or that’s important to me because he’s an asshole like that.

My iPod also overheated! I had it outside with me in the sun and the music stopped and a warning showed up with a thermomotor saying heat warning and I had to cool it down before I could use it again. Who knew? I never knew they could over heat and had to be kept out of the sun, so now on I’ll always just keep it in the shade. The 17 YR old put a 10 min. Hitler rant on my iPod as well and I didn’t know how to delete it but the 16 YR old got rid of it for me and I was FURIOUS! At first I actually thought it was the 20 YR old as he always sabotages my computer except he doesn’t know anything about iPods and then later the 17 YR old admitted it. I just wish they’d leave my shit alone. They really need to find something else to do with their time. The 12 YR old also heard one of The Who songs I have on my iPod and said it’s “redneck” music, once again proving her lack of knowledge of music, and my new diuretic doesn’t work; it’s been over a week and I still retain fluid and haven’t lost any weight yet. Uuuuugggghhhh!