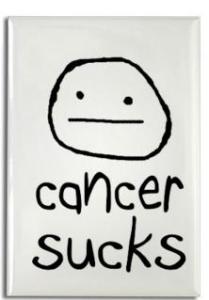 The 17 YR old went to the cancer clinic for his annual check-up, to make sure his leukemia isn’t back. This is his last YR there and then he “graduates” as once he’s 18 he no longer goes to the pediatric cancer clinic but the adult one. Some of the same nurses will still be working there though as they work at both. He’s been going there ever since he was 7 YRS old. The clinic’s at a hospital in a city an HR away and he WAS to stop off and bring the doctors and nurses donuts as a sort of “goodbye” gift except they( he and my hubby) were running late…..meaning….

When my hubby was looking for the hospital parking pass as the 17 YR old was driving he also found an app’t slip for an echocardiogram for him at 11:15 am and it was already 10:30 am….an app’t that he had somehow forgotten about and hadn’t wriiten down….so they switched drivers and he REALLY stepped on it, and drove “like a crazy motherf*cker”( the 17 YR old’s words), speeding the rest of the way trying to make it on time…..and they were only a few minutes late but they still had it cancelled on them and had to re-book it for next week……so needless to say they were late….and never got the donuts,either!

The actual app’t itself was 1 pm however, so why they still didn’t get the donuts I have no idea, other than the fact that my hubby is a complete “tool” and always forgets everything. The doctors were pleased with his progress, were impressed how tall he’s gotten, and said everything looks good, and they took blood but we never got the results and they only said they’d call if something showed up. They were concerned how bad his acne is and said for his family doctor to take a look at it and prescribe him something for it so it won’t cause scars( why couldn’t they; he was already there and they’re doctors…..duuuuhhh…) He also got a book for cancer survivors and they said as a cancer survivor he’ll get a 1000$ scholarship for university and if he goes into medicine it’s a 5000$ scholarship. When he goes off to university he’ll also have to just transfer his medical records and go for his annual check-ups at whatever hospital at whichever city he’s in. I always get so nervous for the app’t’s too until we know he’s ok and he hasn’t relapsed as with cancer you never know…

Did I also tell you about the other day when I got a gyros? It’s basically a Greek donair with Tzatziki sauce. The server looked to be a Roma woman and she was overweight, unattractive,and had bad teeth like me,and she smiled at me, and I instantly felt this “connection” to her, like a “bond”, something like a shared experience, like we lead parallel lives, something that only fellow unattractive people living in a world that caters to, celebrates, glorifies, promotes, and emphasizes beauty would understand; I bet she struggles with the same low self-esteem issues,rejection, and discrimination because of her looks the same way I do, and in that instant we were almost like kindred spirits.

I also smoked another joint for my migraine again( and it worked and got rid of it) I know that most people would just take a Tylenol but my headaches aren’t like most headaches. I still never got “high” though and still felt the same I always do and no different, the only thing is I smelled like weed! I’m wondering if I have some sort of “immunity” to cannabis perhaps, that the receptors in my brain just don’t react to it the way other people’s do…..?