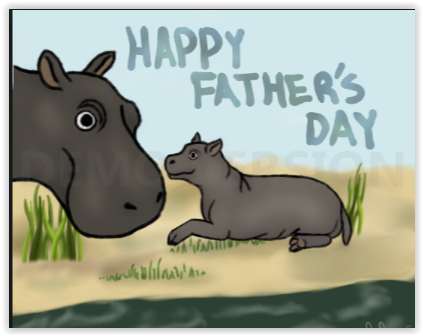 Today is Father’s Day. It is also one of the kid’s birthday’s; she’s now 15. Funny,too: when she was little she made my hubby a Father’s Day card and wrote: “Happy Fatter’s Day!”. This is also the same kid that addressed a label on a Christmas present: “From Satan” instead of “From Santa.” Always good for a laugh. In our house Father’s Day is always a big deal and the kids fawn all over my hubby,and they even bake him a special cake and treat him like a king, so much so it’s nauseating; it’s really over-the-top,and it’s even more annoying to me as Mother’s Day goes practically ignored and unnoticed, even though *I’M* the one that went thru all the hard work: the pregnancies, the births, the YRS of raising babies,nursing,and early childhood….my hubby didn’t even really bother much with the kids until they got older and became “fun” and were able to play, yet he’s the one they love most….it’s so unfair….even my own MOTHER loves him like a son and likes him more than she likes me.

I guess I suck.

Or my family are just ingrates and mean.

On Facebook all week people were also putting photos of their fathers up as their profile pictures in honour of Father’s Day,too, but in order for me to do that I’d have to find a picture of an asshole somewhere so I decided against it. Just another painful reminder of what I never had and how I’ve always been out of step with everyone else, how I’m different, can’t relate, feel left out, etc. Back in the 70’s I was the only kid without a dad and it was very difficult and embarrassing.Needless to say Father’s Day(and having to make cards for it in school) was a very hard time for me as well.I don’t even know what having a father is like and can’t imagine life with one.

There was also a fire a couple of streets over; we saw the thick, black, billowing smoke,and a few minutes later heard the wailing of the fire trucks,and it brought back chilling memories of our own fire 20 YRS ago, and that’s something that I’ll *NEVER* forget, and the 13 YR old passed out in the heat again, like she often does as she gets heatstroke when it gets really hot, and I was outside in the backyard when an airplane flew by overhead so low I thought it was going to shear off our roof and it was so low I could even see the number on the bottom of it: 606,and the incredibly loud screeching of the engines made my ears ring!