When my hubby, the 21 YR old, and his GF went to Ottawa to visit they went by our old house, seen here. He didn’t really remember it much, except for climbing on the roof of the clubhouse beside the house that my hubby built, even though he was 8 YRS old when we moved.This is also our same house that we had the fire 20 YRS ago. 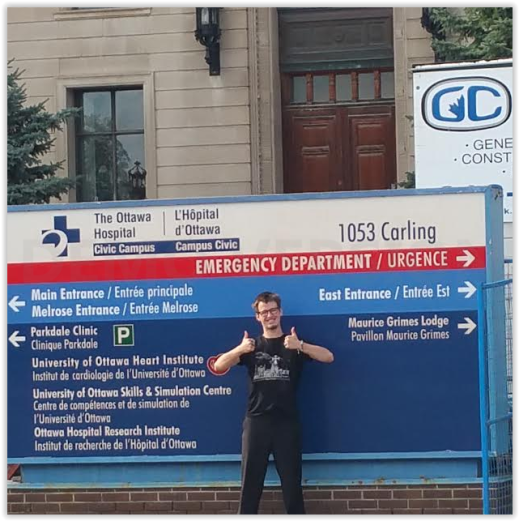 Here is a picture I took of next door, they were digging and it turned out it was to make a driveway but it ended up to just be a half-assed one made of gravel and now just looks like a dirt road like you’d see in the country on a farm. I thought that they’d at least pave it, but nope. It was sooo sweltering hot out too, 31 C and humidex of 38 C that we gave each of the workmen a nice cold bottle of water. The digging was getting precariously close to our driveway with the van,too, and so I went and told my hubby so he might want to move it to avoid possible damage to it….but he just dismissively shooed me away like you would with an annoying mosquito even though I WAS only trying to be helpful. Well them, f*ck him!

As well, I needed my hubby to drop off my empty pill bottle at the pharmacy for a refill and when I gave him the empty bottle he just threw it across the room, typical of how anything for me is just ignored and tossed aside, and he eventually did end up going to the pharmacy a few days later but he still has yet to pick up my pills and I’m  running dangerously low on my blood pressure pills and will be out of them soon, and he didn’t pick up my items I had on the list for when he was in town ,either, saying he ran out of time as he was busy getting stuff on the list for other people instead, even though MY items were on there first, but I always get bumped to last in priority,and the way my family treats me with such disregard just breaks my heart. It’s like I’m an afterthought in my own life.

The 9 YR old also heard me mentioning my coconut oil and he thought I’d said Pokemon oil but that would be so cruel, squishing up all those cute little Pokemon to make oil,and it’s so bizarre as well that every time I go in the pool with him my mother always comes out and watches him and it feels like she’s “monitoring” us, like she doesn’t trust me to keep him safe in the water, but it’s not like I’m going to let him drown or something, and she doesn’t do it when the other kids are in the pool, just him, she’s just so obsessed with him, and he’s the only one she’ll let use her lounge chair when she’s outside,too, no one else is allowed to use it unless she’s inside and not using it.

I also think it’s a disgrace and shameful that the Brazilian gov’t is wasting so much money on the Olympics to show off to the world when there are so many poor and needy people in the favelas that the money could go to much better use; they have their priorities all wrong and should be putting it into health, education, improving living conditions, and alleviating human suffering instead of wasting it on some frivolous sporting event.