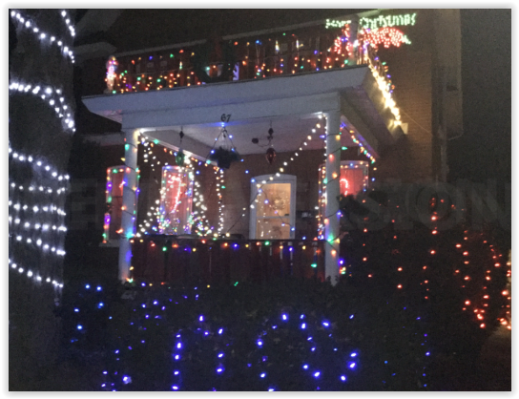 These are our outdoor Christmas lights! Over-the-top, yes, I know. My hubby always over-does it and out-does himself every YR and it gets sooooo tacky it looks like Snoopy’s doghouse, The Griswold’s house,or the Vegas Strip! I bet it’s even visible from space, and that NASA satellites can take pictures of it and they can see it from the International Space Station! They blink and flash on and off and even play music,too, and you can’t see it but there’s an image projected in light on a screen on a wall, but I draw the line at inflatables; those things are just crossing a line. There’s tacky….and then there’s tacky.

As well, I have to adapt to life with my new nails, incl. wiping my ass, opening up a can of pop, pulling up zippers and doing up buttons, washing my hair,attaching Buddy’s collar and leash, typing,etc. it’s a whole new world, but they make me feel glamorous,and  I know I’ll never be pretty and I’ll never be thin again but I can still have funky hair and pretty nails. I’m also worried my mother’s kidneys might be failing as she’s had lower back pain for the past week and hasn’t peed much all day today and her BP was low, but she got her blood taken and sees her doctor next week so we’ll see….

I also ordered this “smoking” shirt yesterday online for a Cyber Monday special( I saved 10$) even though it was actually  on a Tuesday but I’ve always been behind everyone else all the time,anyway! The funny thing is, I was looking for this exact shirt in the mall but never found it, so I did a Google search for “images” and when I found this picture I went to the site….and it turned out to be “Rasta Empire”……a company I already had bookmarked that I had ordered stuff from before! I was so high  as well that I thought there was a portal thru our Christmas tree,  and I don’t want to have to kill myself due to a threat that’s returned from my past,either, and endangers me, but unless there’s a miracle and it resolves in my favor, I won’t,  and  can’t live like that,and just don’t have the strength anymore to fight it or to endure living thru that nightmare again; it broke me the first  time and I simply don’t have anything left to do it again.

I heard as well that PM Trudeau is not going to Cuba to attend Castro’s funeral as it would “anger” people and it is “inappropriate” to do so,etc. but it’s actually disrespectful and rude to not go; whenever a world leader dies it’s expected protocol that other world leaders or their emissaries attend and to not go is poor manners, a sign of disrespect and just plain rude. It’s not every diplomatic,either, which is surprising considering our 2 countries get along well.What an asshole.