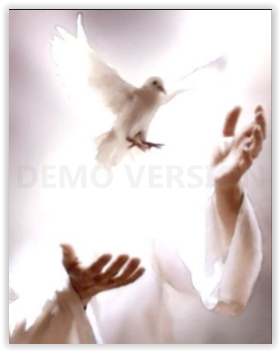 I had a revelation the other day that the reason we had the 2 severely handicapped kids which incl. mentally handicapped where at ages 9 and 10 YRS old they were still functioning at an infant level as well as many other multiple issues was to guarantee that at least some of the kids would get to Heaven as they are pure souls, incapable of sin, unstained from the world,with their consciences unable to make wrong choices as mentally handicapped people are set apart and go directly to Heaven as they don’t have the mental and cognitive ability to  commit sin, the same as babies and children. The same goes for the 6 babies that I miscarried as well; they are in Heaven now, waiting for me and one day we will meet again and be reunited, so even if none of the other kids make it to Heaven, even if they all turn away from God I will still have some that will make it. So what initially seemed like tragedies, made no sense, and we wondered why, now has an answer! In the end, The Big Picture ends up to be a blessing. God’s ways are bigger than ours and sometimes we only get part of the picture, only some of it revealed a bit at a time, and only later will it all make sense.By losing them I end up saving them and having them returned to me.

I also saw this and it gave me a good laugh. Can you guess which one I am? The 17 YR old was rejected by Queen’s University as well as they “don’t consider homeschooling to be a real school” even though the 2 oldest have graduated university with Honours and were also exclusively homeschooled and many universities prefer homeschoolers due to their independent learning, high standards, and superior performance, but I didn’t really want her to go to Queen’s anyway so I’m kind of relieved; they have the worst reputation of partying and drinking, and their Homecoming was even cancelled for a couple of YRS back as it was so rowdy even the police couldn’t handle it! It’s a bad influence and I wouldn’t feel comfortable with her going there; I want her going to a serious academic environment, not a party atmosphere!

There was also a fatal shooting at the airport in Fort Lauderdale, where we have been several times on route to the Caribbean so it really hits close to home and if we ever have $$$$ to go again I think we should switch our route, by-passing USA and just fly direct, like we did that time to Barbados. USA is just too dangerous with all their gun violence!