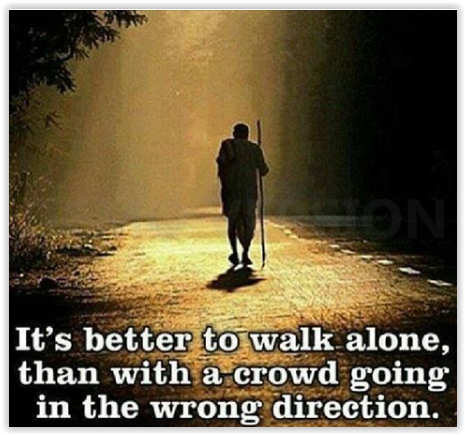 Even though my family is constantly putting me down, hassling me, mocking me, insulting me, degrading me, etc. I do n’t purposely provoke attack, or incite conflict, and in, fact. I want to avoid it! I try to avoid situations that I know might cause tension or conflict, for example. If I know something will set someone off then I won’t do it or say it. Some things are also just best ignored, such as when I jokingly said about  an elderly lady  the 16 YR old was baking brownies for, I’ve got a special brownie recipe she’ll really like! and she huffed, No one cares about your stupid weed, you drug addict!  ( so now somehow medical marijuana twice a week makes me a drug addict?) As you can see, my family treats me like shit and so what I’ve decided to do is mainly just try to simply avoid the worst offenders, just stay away from them, have as little inter-action with them as possible, don’t talk to them unless you really have to, have as little contact with them as possible, avoiding conflict. I figure if I stay away from the most toxic people, the ones that know what buttons to push, that mistreat me the worst, that hurt me the most, that goad me and provoke me, that demean, degrade and disrespect me, etc… It’ll be better for my emotional health and well-being if I just stay away the most from the ones that treat me the worst!

Hopefully avoidance will prevent alot of conflict, arguing, situations, fighting, yelling, disrespect, cruel names, insults, etc. If I don’t see whoever it is that’s most likely to put me down, call me a name, or devalue me and make me feel worthless or wound my heart  in any way and cause the conflict in the first place, then there will be alot less stress in my life! Speaking of which, my hubby’s still going to be staying in Toronto the entire month even though the 14 YR old’s camp’s only 2 weeks and not 4 weeks afterall like we originally thought because she decided to switch programs and this one was only 2 weeks. So I still get a break from him for most of the month but the thought occurred to me when I wondered why he’s still staying there for 2 more weeks even after her camp’s over and she’s now back home, I wonder if he has a mistress there? I’ve been wondering for awhile, actually, esp. since he started working out exercising every day, and stop drinking Pepsi all of a sudden, like he’s trying to “impress” someone…and he also has to be getting IT from somewhere because he’s not getting it from me; he hasn’t touched me in YRS…it really wouldn’t surprise me….my only thoughts are….I’m just glad I still get those 2 weeks with him gone…

My hubby was also back yesterday yet he still couldn’t take the time to drive me to church for 5 minutes even though it was supposed to storm and I have walked for the past 3 weeks but he was too busy so I walked but luckily God sent a breeze so I wasn’t too hot, and I also saw a sunflower in a garden along the way as I was walking and I saw a man pushing his wife in a wheelchair and he was so gentle with her and talking to her lovingly and it was just so sweet to see and I could only imagine if it were me and I was in a wheelchair my hubby would probably push me down the stairs! The more couples I see showing kindness and love the more I really see how I really am mistreated and abused. 😦

Every time I do or say something deemed “stupid”(which apparantly is alot) the 14 and 16 YR old’s insultingly say about me, She must be on her weed! and they “roll” their eyes and most of the time I don’t even have a clue what I did; what my transgression even was, and my family just makes me feel so worthless, so unlovable so useless, I’m now convinced that no one can love me ( other than my dog) even though I still do crave human connection, and I pray to God He sends me someone to love me, to show me I am worthy, and deserving, of love in one form or another , whether a romance, a friend, or a mentor….someone to come into my life and show me that they love me; that there really is someone out there who loves me and can love me. That I am loveable……to someone.