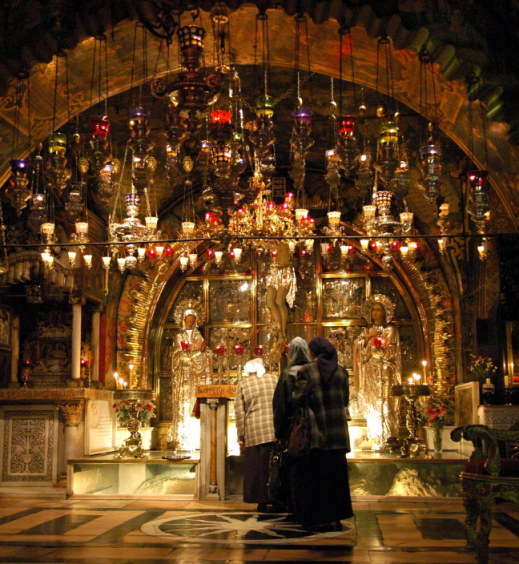 Today is Easter, or as I call it, Resurrection Day, the day Jesus rose from the dead. It is also the holiest day of the year. Last night was my fave. Mass as well, the Easter Vigil. I just love the candles, the bells, and the incense. I even had what you might call a “mystical” experience as well: I was deep in sorrow and suicidal over my hopeless shitty life and I prayed to God for a sign of hope and then the altar area “transformed” before my very eyes into a light pink colour and the wooden Crucifix changed into a bright brilliant gold but with a bright white light like I would imagine you’d see in Heaven, like the colour seen in this photo on Jesus’ loincloth and then later it was back to normal again. I took it to mean that I will go to Heaven when I die. My life’s so bad that even if I went to Purgatory it would still be better, and preferable, to my life here and the suffering I endure. My toxic family wouldn’t be able to hurt me anymore, I’d be healed of my emotional, mental, and physical issues and my brokenness that I’m hated and blamed for, and I will no longer have any anxiety, worry, fear,etc. and the constant crisis will finally end. I will be at peace.

As well, there was this dapper, distinguished Indian guy sitting next to me in church and he was wearing a nice suit, had grey hair around his temple, and had the most amazing cologne, and it awakened my inner ‘ho….here I was in church, trying to be spiritual and I was thinking all these naughty thoughts instead. What’s wrong with me? I also heard in order to heal and recover( from trauma, for example) you need love and support, the 2 things that I don’t have, and, in fact, my toxic family is my biggest problem! It wasn’t supposed to end this way. I was supposed to find love and marry a wonderful guy who loved me and I was supposed to have nice kids but it all just backfired and yet something else that went wrong and didn’t work out for me. When I die I know Buddy will be sad and miss me but the others will be glad and say, Finally! It’s about time she finally got it right! What I hope for my family to remember me by is to be kind to others, sort of as a way to “make up” for the abusive way they treated me, esp. for the 16 YR old to not be such a mean girl, for them to love and take good care of Buddy, and to return to God and their faith. I also hope they do have some good memories of me, before I broke so hard, and when they see hippos or sunflowers they’ll think of me.

The 18 YR old also made the Dean’s List, a bottle of juice exploded and my guess is it must have fermented and the gases building up created pressure and made it explode like a bomb, and I tried to message Patti to see how her dog’s X-ray went ( it was supposed to be yesterday) to see if her dog’s prego or not,and if Buddy’s going to be a father…..and I found out she defriended  me on Facebook! What the f*ck? Now I’ll never know and what did she do; just use me for Buddy’s stud service to get puppies and then just get rid of me once she didn’t need me anymore? This really hurts. I thought she was my friend. I should have known though, in the end everyone betrays me. Fortunately, the 16 YR old was somehow still able to access her account and found out her dog IS expecting 3 puppies. If it weren’t for Buddy she wouldn’t even be prego at all. Is it that she doesn’t want me to know? Is she worried I’d want one and she’s just being greedy and wants to keep them all for herself? I found out as well not only did she defriend me, she blocked me.

My hubby also chides me that if I exercised that it would “cure” my breathing problems but he doesn’t know what he’s talking about; it’s a life-long chronic condition, just even worse now I’m older, when I exert myself I have even more trouble breathing and I can’t catch my breath and I’m huffing and puffing….knowing him he probably just wants me to over-do it so I drop dead.He also somehow sabotaged the TV remotes so I can no longer mute anything ( so I just stopped casting it off my computer onto the TV and just watched it on my computer screen, so I could see it but he couldn’t; he’s NOT f*cking around with me like that; I’ve had enough of his shit! ) and he snarked cruelly when I went to my computer, Oh, you can get up and move off the couch!( and I replied, F*uck YOU!) and when I confronted him about it he ( as a means to control and “punish” me)snickered, Have fun walking to church! refusing to drive me(even though earlier he said that he would), and I had to walk alone in the dark again and it was pouring  rain and I got soaking wet. If that doesn’t symbolize my life, I don’t know what does.

In Mass I broke down and just started crying as well; it all just came out but the beginning part was in the dark anyway so no one could see and they’d just think the sniffling sounds were because of my cold. I just feel so hopeless, so lost, so spent, so defeated, deflated, and depleted. I just can’t do this anymore. I’ve had enough and there’s nothing left to give. I can’t even think of one reason why I shouldn’t just kill myself right now. I have to find an alternative way that also isn’t painful or messy since pills obviously don’t work. Going to church I was tempted to walk out in front of a car but then I didn’t as it wouldn’t be fair to the poor driver who would be traumatized by it and they never did anything to deserve it. I just want to die but I don’t want to hurt anyone else. I just want my suffering to end. I heard heroin overdose is the best way; you just drift away painlessly but I wouldn’t have any idea where to even buy it from, esp. since the cops raided the drug dealer that used to live on our street. I just want to be someone else, somewhere else. I want to be free of this body, this life, this family. I want the pain to finally end.There’s no hope anyway. I want to be free. I want to soar. I want to fly.