This is the position I’m to be found in all day due to my acute abdomenal pain. It’s so bad I can’t stand up straight and have to be hunched over with my hands clutching my abdomen. I also can’t sit up or lay on my stomach the pain is so bad(which is a problem since I can only sleep on my stomach!) and every time I change position, cough, laugh, or bend over the pain worsens.  My lower back is really sore as well and it started at 5:30 am as soon as I woke up and hasn’t let up all day,and, in fact, just continues to worsen as time goes on but I’m just going to wait it out and see if it resolves on it’s own. My mother says I should go to the ER but for one thing, I can’t sit, so I’m certainly NOT going to spend 6-8 hours sitting in the ER waiting room! F*ck that!!. Luckily I have a high pain tolerance…Maybe it’s just like I think it was with my mother’s back pain; maybe it’s nothing more than emotional pain just manifesting itself as physical pain? If so, then I’d really feel stupid for going to the hospital if it ends up to be nothing, or to just waste my time and have them just dismiss it as IBS like all the other doctors have.

This is pain on an entirely new level all on it’s own. It’s to such a degree that even weed didn’t relieve it and that’s a first; before, for other pain, even when all other meds fail (incl. codeine, Tylenol 3, Tramadol, etc) weed always works, but not this time. This pain was so intense nothing relieved it, and the heating bag didn’t do a thing,either. It first started off kind of crampy and colicky and I thought Aunt Flow might be coming(and so far it’s a week late) but as time went on the pain intensified and then it felt like when you have really, really bad gas and when you have bad constipation, and it felt like if I did a good shit it would relieve it but it didn’t ,and I shit 4 times,too, but then it still continued on to be even worse, the kind of pain where you curl your toes, clench your fists, and break out into a sweat from the pain. It’s tender when I touch it as well and when I stand up it feels like a surgical incision as it recovers.

What is going on? This is definitely something more than just IBS! I’d say something is either inflamed, infected, bleeding, or rupturing,and my first guess would be appendix, based on the severity of the pain( but it’s generalized though thru the entire abdomenal region, not just in a local spot) or maybe even colon cancer, and remember I did have the colon polyp 9 months ago, and they increase your odds of colon cancer dramatically, but it might also be an abdomenal aortic aneurysm expanding and on the verge of rupturing, esp. since that’s the way I think I’m going to die…Buddy can sense something’s wrong as well as last night he was cuddled up to me in bed extra close and all day he’s close-by even more than usual and when the pain’s extra bad he’ll come cuddle up with me and nuzzle against me,whining, licking my face, and one particular time I was outside laying on the porch swing out back and he came bolting out the back door and in a flying leap landed on top of me and was whimpering, pawing at me, licking me and barking. Maybe there’s a certain scent I emit when I’m sick or in pain or something, either that, or we’re just so close that he’s in tune with my vibes? 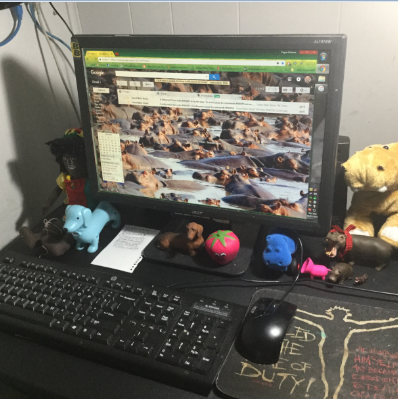 My hubby’s also cleaning and packing preparing to move and he threw out my old computer desk and replaced it with this newer, smaller one, seen here. Here is my new desk and computer area. I don’t care either way, as long as I have my own little space, my private nook, in the corner, and still enough space to put my hippos and stuff on. Just as long as he doesn’t throw out any of my hippo stuff though!

If you don’t hear from me anymore after this and this ends up being my last blog post then that means that whatever this is causing my abdomenal and back pain killed me and if so, then goodbye. My message: Love one another. ♥