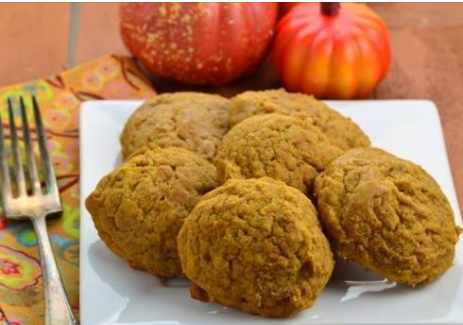 Preheat oven to 350 degrees.
Have ready some ungreased baking sheets.
In a large mixing bowl, cream butter and the sugars together until light and fluffy.
Blend in pumpkin, egg and vanilla extract.
In separate bowl, stir together flour, baking soda, baking powder, cinnamon and salt.
Mix flour mixture into butter-sugar mixture.
Drop tablespoonfuls 3 inches apart on ungreased baking sheets.
Bake the cookies for 10-12 minutes until golden around the edges.
Remove warm cookies and transfer to racks.
Let cool completely for a least one half hour, then frost with glaze.

For Glaze:.
In a medium saucepan, heat butter and brown sugar over medium heat until bubbly. Cook, stirring constantly, for one minute or until slightly thickened. Beat in the milk. Blend in confectioner’s sugar until the glaze is smooth and spreadable. Using a silicone basting brush, which I love and use religiously now, or a butter knife to spread glaze on cookies is the best tip. 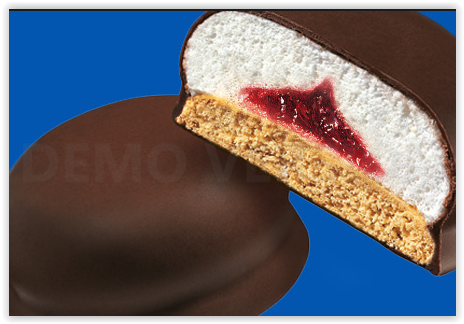 At the eating disorders clinic yesterday  the 14 YR old had some Viva Puffs cookies (pictured here) for her snack and as she picked off the chocolate top and popped the tiny pieces into her mouth bit by bit they scolded her to take bigger bites and not nibble as it’s “disordered eating….” except in this case this is the unofficial proper way to eat Viva Puffs! Everyone I have ever known has ever eaten them this way,myself included; there’s a right and proper way to eat a Viva Puff and it’s like this: first you have to break the top so it cracks and then you peel off the chocolate, bit by bit, and pop it into your mouth, until just the marshmallow is visible and then you bite that off, bit by bit, and only then do you bite into the jam and cookie at the base! Under no circumstances do you ever take bites out of the entire thing intact or pop the whole thing into your mouth! You just don’t, that would just be wrong ,and if you do then there is something inherently wrong with you! That’s just the way to eat Viva Puffs, the right way, the proper way, the only way, and everybody knows it. I mean, who doesn’t know that? Seriously, though, really, what’s wrong with people?

As well, driving to the clinic is nice this time of year now in fall seeing all the different colours of leaves on the trees and yesterday was really foggy as well esp. in the flat land areas and rural areas and farmlands along the way and I saw a roadkill I’m not quite sure what it was but by the long thin shape I’d guess probably either a ferret or mink,and it’s tail was separate from the rest of it and it just struck me as so sad and the 14 YR old gained 300 g again, slow but steady progress and at least she’s gaining weight and not losing so it’s still an improvement but she said she still doesn’t feel any different on the inside so I suggested maybe they give her a complete overall psychiatric evaluation just in case maybe there’s something else that we’re missing as well on top of the eating disorder, as it’s possible she could not only have the eating disorder but another condition as well that’s gone unnoticed and being overlooked…

I also noticed as well in the week since the polyp’s been removed from the colon that my shits have been normal; no more diarrhrea, at least not yet, not so far anyway, and my Facebook friend with cancer found out that she’s dying,too, and they said they don’t think she’ll live to Christmas which is sad, and it was so sudden and unexpected, and my hubby was insultingly referring to my music and referred to it as, What’s that annoying noise I keep hearing? to which I replied, The only annoying noise I hear is your voice! I swear, he’s such an asshole. Whatever shit he sends my way I just send it right back though. I’m not putting up with his shit. I’m just so fed up with that f*cker and all his crap.

Funny as well: I head harsh hacking coughing coming from the 22 YR old’s( 23 next week!) bedroom when him and his GF were in there, behind closed doors so I yelled thru the door, Are you guys smokin’ weed in there? and then after a short pause I added, If you are, save me some! and then I heard laughter, and it hit me when I realized what must have been so funny: usually when parents catch the kids smoking weed they’d be mad and tell them to quit it but not me(I’m the Cool Mom, ha, ha); he’s an adult and he’s over 18; I just wanted to make sure if they were that they saved some for me,too! 😀  As it turned out though they weren’t; his GF was just choking on a popcorn so I told her to have a drink and wash it down. 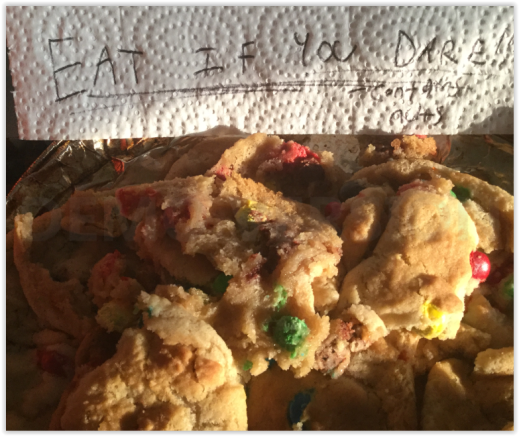 These are the disasterous so-called cookies that the 17 YR old and her friend made. They ended up under-cooked clumpy, crumbly, broken,lumpy messes, all soft in the middle. She is a disaster in the kitchen.It’s now sort of become an ongoing joke in our family.

Her friend’s dad is a Master Chef too that has cooked fancy gourmet meals for the Prime Minister and the Queen. If he saw this he would just cringe.

There are simply no words. 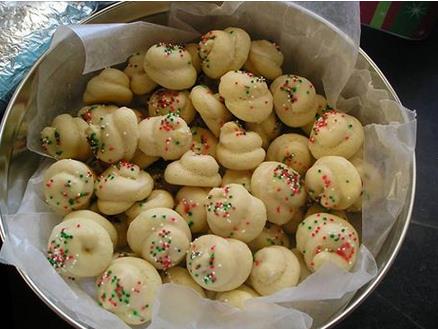 Knead and add flour as needed to keep dough from sticking to hands. Pinch off dough, roll in your hands to form a log and then twirl into shape. Place on greased cookie sheets. Bake at 375 for 10 minutes.

In a large bowl, combine the Oats, 1 cup of coconut, and Cocoa.

In a medium Sauce pan, combine the Sugar, Milk, and Butter and bring to a boil. Reduce heat and simmer for approx 10 mins.

Pour the boiled mixture over the oat mixture and stir until well combined. Let cool Completely. Roll into balls…whatever size you want and then roll into coconut until well coated. These freeze well and even if you don’t freeze them, they last forever either at room temperature or in the fridge!