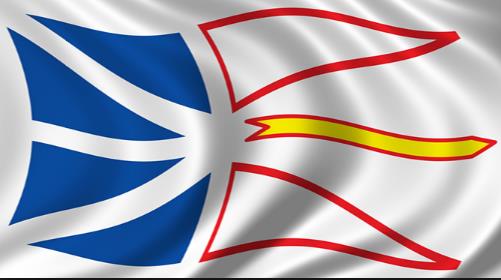 One of the neighbours has this flag flying on their front porch and I’d wondered what it was as I didn’t recognize the country and normally I’m really good with geography and know countries’ flags but this one had me stumped…..until I just happened to see it on the news the other day…..it turned out it’s the provincial flag of Newfoundland(so I guess they must be Newfies!) boy, am I dumb! I have to admit I don’t really know most of the provincial flags that well, other than Ontario, Quebec,and Nova Scotia. My hubby didn’t know what it was either,though(so I’m not the *only* dummy!) and if I was to fly a flag I’d probably fly the Jamaican flag for Bob Marley. (YRS ago I used to have the old Soviet flag in my bedroom back in the 80’s) They’re also considering changing part of the national anthem to accommodate Political Correctness changing “sons” to “us” to incl. women even though it’s understood to mean everyone, like how “mankind” means “humankind”. Political Correctness is just sooooo stupid it’s ridiculous,and,in fact, when I’d first heard about it I actually thought it was a joke!

As well, when my mother went out the front door she found a raccoon rifling thru the recycling box which surprised her as they normally don’t come out until it’s dark at night(maybe it slept in?) and the furnace guy came and took a photo of our A/C to be able to order the new part but my mother said if it’s too old(we had it put in 13 YRS ago when we bought the house) and they can’t FIND the part and we have to get a whole new unit that she won’t as we just don’t have the $$$$$ as it costs at least 5000$ so we’ll just be sweltering to death and die of heatstroke this summer…..and it’s supposed to be a *REALLY* hot one,too, 10 degrees hotter than normal! It figures! Just OUR “luck!”

I was also woken up at 5 am with a splitting headache unlike any I’ve had before; it was hard to define and I wondered if I was going to have an aneurysm or something(and maybe that’s how I’d even die?) and the 13 YR old was cleaning and found 50$, and one of my make up brushes mysteriously showed up back in the bathroom after it had disappeared,too, and one of the 20 YR old’s childhood friends is getting married on the weekend as well and I can still remember when she was just a little kid and now she’s all grown up and getting married so that really makes me feel old! It’s funny too the difference just a YR can make in someone’s life as well as last YR at this time she had her highschool prom and graduated highschool….and this YR at the same time now she’s finished her first YR of university and now she’s getting married! They’ve only been dating since December,too!